A UNIT at St Regis Residences chalked up the biggest subsale loss in the first eight months of this year: a massive $5 million.

But on the flip side, it was also a unit at the same 999-year leasehold development which raked in the biggest gain of $1.39 million. The fifth floor unit was transacted in July at $9.5 million - up from the $8.1 million original purchase price. The seller had bought the unit direct from the developer in June 2006. 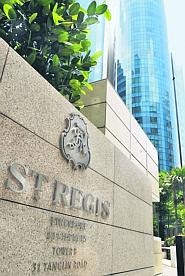 The loss-incurring unit, on the sixth floor, was sold in May. The transacted price was $7.98 million, compared to the nearly $13 million at which the apartment previously changed hands in July 2007, during the peak of the luxury housing market.

Interestingly, the $7.98 million subsale price for the property in May is not far off the $8.16 million that the apartment had been originally sold by the project's developer in June 2006.

Another St Regis apartment, this time on the 11th floor, was transacted at $7.8 million in June - $2.7 million lower than the $10.5 million the developer had sold the unit for in April 2007.

All three transactions were picked up in Savills Singapore's analysis of URA Realis caveats as at Aug 28.

Overall, in percentage terms, the most profitable subsale transaction this year yielded a 103 per cent gain.