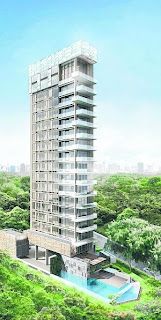 IN YET another sign that the residential housing market is red-hot, a handful of small firms are venturing out of their core businesses to make big bets on real estate development.

Aztech believes there 'will be long-term sustainable demand' for its new business given the projected population increase.

'The residential property sector in Singapore has seen tremendous growth in terms of the number of new projects launched as well as the amount of interest in these projects among investors and buyers,' the firm said in a statement last Thursday.

The company's move follows that of Heeton, which was formerly in the wet market business but recently sold off its five markets to Sheng Siong to focus on boutique property development.

It developed the exclusive The Lumos condominium in Leonie Hill.

The firms are following in the steps of companies which branched out into the property sector during previous booms, such as bookstore chain Popular Holdings, which went into the market in 2006.

In June this year, it launched its maiden project, the 14-unit One Robin, which was sold out within two months.

Other developments under its belt include yet-to-be-launched 18 Shelford in Shelford Road and 8 Raja. The plunge in the fair value of these two developments caused the firm to report a net loss of $17.6 million for the year ended April 30, instead of a profit of $13.6 million.

The property bandwagon also picked up a few passengers during the real estate boom in 2000.

Among them were specialist contractor BBR Holdings, interior design and finishings firm Nobel, industrial gas and equipment supplier Leeden (then known as ACE Dynamics), as well as Noel, which sells hampers.

Market experts say firms now are likely tempted by the fever sweeping through the residential sector.

Lower construction costs and further growth in the property market, especially with the impending launch of the two integrated resorts, could potentially mean higher margins for developers.

'Land prices for high-end residential development are still at a substantial discount (compared with) the recent peak in 2007/08,' said Ms Tay Huey Ying, Colliers International's director of research and advisory.

Developers can reap potential returns of about 10 per cent to 15 per cent, although that pales in comparison with the 2007 property bull run, where returns on prime projects could be as high as 50 per cent or more, said Mr Brandon Lee, a property analyst at DMG Research.

UOB Kay Hian analyst Vikrant Pandey is positive over the mid- to long-term prospects although recent government measures to cool the market could dampen the pace of recovery in the near term.

'The current recovery in the property market has been supported by the strong underlying demand-supply dynamics, low interest rate environment and high liquidity flows that are expected to remain favourable,' he said in a report last week.

It is also not difficult for firms to break into residential property development.

'The residential segment has a lower barrier of entry; it is not as specialised as office retail or industrial, and is close to everyone's heart,' said Ms Tay.

But the capital-intensive and cyclical nature of the business means companies need to have the holding power to last through downcycles.

It is also a highly competitive market. The newcomers will be pitting themselves against larger developers with proven track records, more aggressive marketing strategies and larger war chests.

'It happens in every cycle,' said Mr Lee. 'It's easy business if the market is good. The key issue is what happens when the market comes down.

'Personally I don't think the market is big enough to accommodate so many players in a normalised cycle, although in an upcycle, it can.'