Steady sales at The Interlace condo despite ban on IAS

THE government's move to ban the interest absorption scheme (IAS) and the rowdy start of The Interlace development's preview last Tuesday have done little to dampen sales of the CapitaLand and Hotel Properties project. 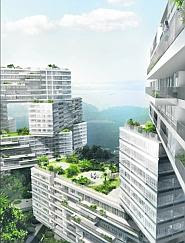 'We didn't expect the scrapping of the IAS to affect us very much, because a very small percentage of buyers opt for it in general, about 5 to 7 per cent,' said Patricia Chia, chief executive officer of CapitaLand Residential Singapore, at The Interlace's sales briefing yesterday.

The Wharf Residence, CapitaLand's other development, saw less than 5 per cent of buyers taking up the IAS. The scheme was abolished by the government last week as a precaution to prevent the overheating of the property market.

The preview took a dramatic turn when a shouting session ensued, fuelled by former residents who had previously been unhappy about the en bloc deal, and claimed that a poor choice of units had been offered by the developer at the preview.

CapitaLand maintained, however, that a mix of units ranging from 800 square feet (sq ft) to 5,800 sq ft in size, facing the pool, sea and HortPark had been on offer.

Since then, the two and three-bedroom units have been the best-selling among the 233 units sold. Prices range from $850 per sq ft and top out at $1,150 per sq ft.

To date, about five penthouse units out of the 18 units released have been sold. The largest penthouse stands at 5,877 sq ft and is priced at about $5 million.

The 99-year leasehold project will receive its temporary occupation permit in 2015.

This 1,040-unit project, located on an eight-hectare site, will also be the first one of its scale to be managed by CapitaLand itself.

'We felt that our condominium management would be able to offer a value-add to the development,' said Ms Chia.

As part of the management plan, residents will be offered a free shuttle bus service to the nearest MRT station for the first five years.

The 31-block project, is made distinctive by the unique stacking of apartment blocks in a hexagonal arrangement. The sale process had been fraught with tension over the last two years as minority owners opposed the $548 million deal at every turn.

The Court of Appeal dismissed a final attempt by minority owners to overturn the sale in February this year.