Prices have more than doubled over the last decade

PRICES of good class bungalows (GCBs) have picked up strongly since early this year, topping prices fetched in the last property peak in 2007. GCBs are owned by a select group of wealthy individuals, who may well own more than one such bungalow. There are an estimated 2,500 GCBs in Singapore today. By definition, GCBs need to have a plot size of at least 1,400 sq m (15,070 sq ft) and be located in one of the areas zoned for GCBs.

The rising number of high net worth foreigners who become Singapore permanent residents (PR) and citizens form the bulk of prospective buyers for GCBs. Apart from this group, we are also starting to see investment companies acquiring GCBs for their portfolios. 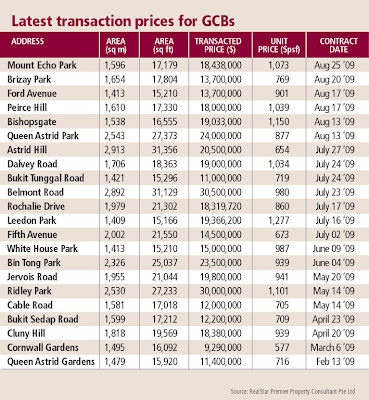 It is generally perceived that with the pricing of premier condominiums ranging between $2,500 psf and $3,500 psf, there is a lot of upside growth for GCBs whose average price is about $1,000 psf.

With the strong demand for GCBs, we are beginning to see a shortage of such properties for sale, especially in the prime areas. GCB prices have risen steadily since the start of this year, and have climbed by nearly 25 per cent in less than a year.

Lately, we are seeing more GCB buying from new PRs and citizens. In addition, we are seeing situations where Singaporeans are prepared to buy GCBs with existing tenancies although the rental yield is generally low at about 2 per cent. GCBs can be found in popular locations ranging from districts 10 and 11 to districts 21 and 23. Of these, the most sought after GCBs are in the prime district 10. 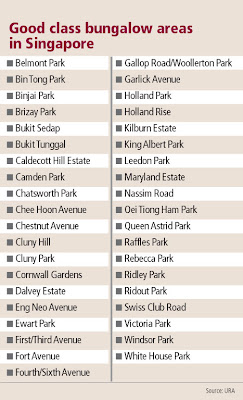 The most expensive GCBs are located in the Nassim and Ladyhill area, followed by those in Tanglin, such as Bishopsgate, Chatsworth and Rochalie, and those in the Tanglin-Holland vicinity, such as Swettenham and Peirce roads. Bungalows around the Botanic Gardens, such as Cluny and Dalvey, are also in demand.

There is no special preference for old or new properties among GCB buyers. Generally, key deciding factors for GCB buyers are the site's location and land specification, ie, regular shape, above or below road level, gradient, etc. This is because most buyers often rebuild the house, whether the existing one is old or new.

The first thing a buyer needs to know is if the property is in an area designated for GCBs by the Urban Redevelopment Authority (URA). Not all properties with a land size of more than 1,400 sq m qualify as GCBs.

Prospective buyers should also be aware of the property conservation scheme in Singapore. Those earmarked for conservation cannot be torn down and rebuilt. This is especially true for older properties with colonial architecture.

Lastly, prospective buyers who are PRs should be aware that under Singapore property law, they are not allowed to buy a GCB that has more than one year of tenancy remaining.

In addition, Singapore PRs who want to buy a GCB have to get permission from the Land Dealing Unit of the Singapore Land Authority. The maximum size of GCBs open to PRs for purchase is capped at 1,400 sq m, although there could be waivers in some cases.

The outlook for the GCB market for the rest of the year and 2010 is good, with the buying momentum expected to continue.