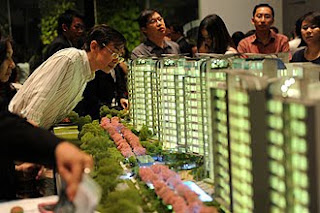 WEEKEND buyers again flocked to one of the most popular recent mass market condominium launches, though the frenzied pace of selling of late last week appeared to have slowed slightly.

City Developments (CDL) said it had sold another 116 units at the weekend preview of its latest condo project Hundred Trees, bringing total sales to 316 units.

That is nearly 80 per cent of the development, or more than 90 per cent of the 350 launched units. The condo, which sits on the 267,598 sq ft former Hong Leong Garden condo site in West Coast Drive, has 396 units.

The average price achieved is about $910 per sq ft (psf), up from the initial price of $895 psf for the first 151 units sold, the developer said yesterday.

There was a 'slight adjustment of 1 to 2 per cent increase in price' for the subsequent phases, it said.

As with many recent launches, the smaller units were the first to be snapped up. CDL started the preview last Thursday and sold 200 units, including all the 22 one-bedders and most of the two-bedders, within two days.

CDL will be formally launching the 956-year leasehold condo for sale this weekend even though most units were sold in the preview.

About 25 per cent of the buyers paid 2.5 per cent on top of their purchase price in order to take up the interest absorption scheme.

The scheme allows them to defer the bulk of the purchase price until the condo is completed. This option was removed by the Government earlier this month, though projects that were offered for sale with the scheme before the removal can continue to do so.

CDL said 85 per cent of the buyers were locals, and that they were a balanced mix of HDB upgraders and buyers who already live in private residential property.

Its group general manager Chia Ngiang Hong said the company observed that some buyers were keen to hold their units for investment or rental income in view of the upcoming redevelopment projects like Clementi Town Centre.