DEFYING all expectations, Singapore's residential property market has rebounded in the thick of the worst recession the country has seen. Buyers turned up in droves at recent project launches, sending the home sales figures in July to its highest level since the peak in June 2007. New home sales between January and August were just 21 per cent below the total number of homes sold for the whole of 2007. 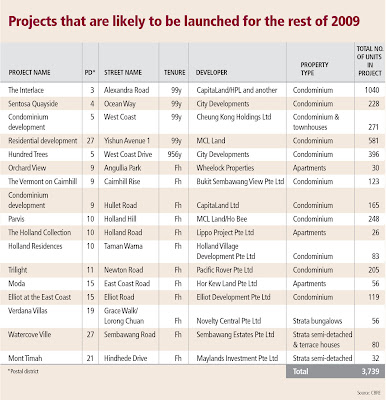 But going forward, prices of mass market and mid-tier projects are expected to face some resistance. The number of launches is also expected to be limited for the rest of the year. Even as the market was debating the outlook, the government announced anti-speculative measures mid-month which makes it almost certain that sales volume and prices will moderate.

The robust residential market of the past few months seemed to mirror the peak in 2007, notwithstanding the recession. Market sentiment ran high as the stockmarket rally continued for four months starting in March. The strong take-up of new homes, led by mass-market projects back in February, filtered up to the mid-tier segment by April and to the prime segment by May.

Buyers have been prowling showflats, concerned that home prices may be rising again after having corrected from peak levels. It appears that what started out as pent- up demand progressed into investment demand, and to some extent, speculative demand. Developers launched 10,496 new homes for sale from January to August, compared to 6,107 units in 2008. The total number of new homes sold up to end-August was 11,721 units, far exceeding the 4,264 new homes that were sold in all of 2008.

Buoyed by the stockmarket rally, developers seized the opportunity to launch several mass market projects and found ready buyers. Mainly HDB upgraders, they made up 51 per cent of buyers of new homes in the first eight months of 2009. The number of new homes sold in August was a decent 1,699 units as strong sentiment continued to support the residential market. Including the 2,772 units sold in July, a total of 4,471 units were sold in the two months, which will probably add up to 5,200 units by the end of the third quarter. This would likely exceed the 5,129 units sold in Q2 of 2007, the highest recorded number of new homes sold in a quarter.

There was continued interest in high-end investment grade properties as evidenced by the sale of seven units each in The Orchard Residences ($2,720 psf-$4,099 psf) and Nassim Park Residences ($2,782 psf-$3,453 psf) and 11 units in The Hamilton Scotts ($2,300 psf-$3,313 psf). Property prices have been stable in Q2 and Q3, with some upside seen in projects with brisk sales.

The strong sales volume has been the cause for the government's concern that a bubble was building up in the residential property market. Hence, the implementation of the measures on Sept 14 to ensure the stability of the property market. The measures include the immediate removal of the interest absorption scheme (IAS) and interest-only housing loans (IOL) scheme for projects yet to be launched. This will dampen speculation and put a check on rising prices from the escalating sales volume.

The re-introduction of the confirmed list in the government land sales programme for the first half of 2010 will ease fears of a supply shortage. The non-extension of Budget assistance measures also signalled the government's confidence that the residential market is sufficiently resilient to weather the current financial crisis.

This could be attributed to projects like Double Bay Residences, Livia, Optima @ Tanah Merah, Trevista and Waterfront Keys. As for new freehold homes, the price jump was 32.2 per cent from $1.06 million ($949 psf) to $1.4 million ($1,241 psf) because more of the projects launched were located in the prime districts. Examples include Sophia Residences, Viva and Volari.

The number of launches is expected to remain limited for the rest of the year. Median prices of new luxury homes in districts 9 and 10 may have risen 18 per cent to $2,700 psf in Q3 from the previous quarter. But they remain about 28 per cent below the 2007 peak of $3,750 psf. Developers appear to be in a good position to hold off luxury launches for the time being, considering the high price they have paid for the land and current construction costs.

They will continue to launch mass market and mid-tier projects, which are more affordable, now that the IAS and IOL schemes have been removed. Home buyers who only have sufficient funds for the upfront 20 per cent downpayment will probably hold back on buying any newly launched projects and look instead to projects close to completion so that they can sell their existing home to finance the new purchase.

Home prices and sales volume will be moderated to more sustainable levels with less volatility. New home sales for the full year should exceed 14,000 units with a possibility of surpassing the market peak of 14,811 units in 2007. Certainly, further price increases for the rest of the year will be held in check.