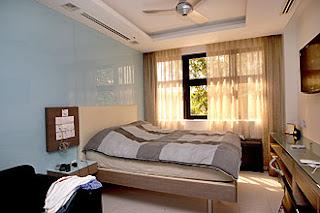 THE owner of several units in a residential and commercial property on Beach Road has caused an uproar among other building residents for sub-dividing his units and offering short-term leases on them.

Mr Tan Fung Chuan also leases or manages several other units in The 101, a strata-titled building.

The residents there have complained that the building is now 'like a hotel' because of the constant comings and goings, prompting The 101's management council (MC) to lodge a complaint with the Urban Redevelopment Authority (URA) about the sub-divisions and the short-term leases.

The URA, which said the short-term leases offered by Mr Tan were 'not authorised', is now investigating. It said, however, that it had granted approval for the sub-divisions, on condition that they were for long-term residential use.

According to the MC, the alterations carried out by Mr Tan resulted in 10 apartments at the six-storey building being converted into 26 units.

The renovations include the building of new walls and bathrooms, and the erecting of new doors to common walkways. Plates with names - such as Suite Paris and Suite Tokyo - now adorn doors to the rooms. Each room is about 350 sq ft, and comes equipped with queen-sized beds, flat-screen television sets and en-suite bathrooms.

Marketed as 'mini-studio boutique suites' with the option of cleaning services, the rooms are advertised freely on a website and in newspapers. They are popular with expats, tourists and students.

Anonymous checks revealed that the apartments are rented out on a weekly or monthly basis for about $3,500 a month, depending on the room type.

In response to queries from The Straits Times , the URA said: 'Leasing of apartments on a short-term basis would effectively change the use of the residential premises from residential to serviced apartments or a boarding house, which is not authorised and constitutes a planning offence,' said a URA spokesman.

'The high turnover of occupants can cause disturbance and inconvenience to other residents,' it said, pointing out that short-term accommodation meant renting units out daily, weekly or monthly.

It added: 'It was stated clearly in our written approval (for sub-dividing the units) that the premises are strictly for long-term residential use and cannot be converted to serviced apartment or boarding house use.'

But when contacted, Mr Tan - a former chairman of The 101's MC from 2003 to 2005 - flatly denied that he was doing anything wrong and refused to comment further.

'I am complying with URA regulations, I do not know what you are talking about,' he said when queried about the short-term leases. 'If I am not allowed to do this, URA would have come after me a long time ago.'

According to the current MC, Mr Tan owns five units at The 101, leases another three and helps to manage two others.

Checks by The Straits Times show that he is listed as director of Beach City Serviced Residences, which is listed on the website that markets the rooms.

The current MC, led by Mr Thomas Tan who owns a commercial unit at The 101, said it has received numerous complaints from residents about the matter.

'We are at wit's end. There are strangers walking in and out of the building, and the other residents feel unsafe in their homes,' said Mr Thomas Tan.

'I really hope the authorities will take action soon, before things get worse, ' he added.

Residents like Madam Chen Lee Sung, who has lived in a fourth-floor apartment at the 24-year-old building since it was completed in 1985, echoed the concerns.

'It is noisy at night, and there is no security with people loitering about in the corridors,' said the 80-year-old, who is wheelchair bound. 'I went up to a man once and told him to stop what he was doing and he just ignored me.'

Unauthorised use of a residential property is punishable by a fine of up to $200,000 or imprisonment for up to 12 months or both, said the URA.