Increased sales strongly suggest that buyers are convinced property prices have bottomed, or are low enough for them to re-enter the market

GIVEN the recent euphoria in the residential market, it is no surprise that it has become a hot topic of discussion. Isn't Singapore still in recession, people wonder. Unemployment is still high, with an estimated 116,600 jobless residents as at June this year. 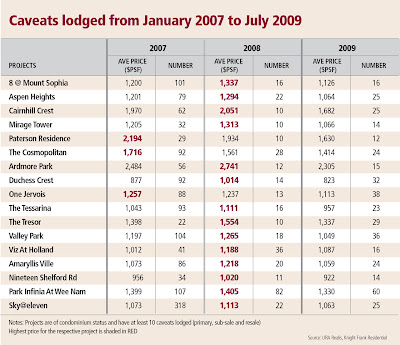 And while gross domestic product (GDP) forecasts have been revised upwards from an initial minus 9 per cent to the current minus 4 per cent, the 'improvement' is still a negative figure. But none of this has dampened the buoyant mood of buyers and the flurry of launches.

So what's driving this burst of buying, and is speculation rampant? We take a look at the situation, with our focus on the upper-mid to high-end segment where prices average $1,500 per sq ft.

First, we compare the recent bullish market to the boom of 2007. Two years ago, the activity had started in the high-end segment, driven by foreigners eager to buy into Singapore due to the good job done promoting the city.

This, coupled with pent-up demand, led the market to experience one of its most active years, with 14,811 new units sold during the year. Speculation quickly came into the picture, and the government abolished the deferred payment scheme to rein it in. But it was the global financial crisis that eventually brought the market to a standstill.

The current bull run started in the mass market where pent-up demand pushed up sales after a dry spell of almost six months following the collapse of Lehman Brothers. The successful launch of Caspian in Jurong West and Double Bay Residences in Simei gave rise to renewed confidence in the property market, and the optimism filtered up to the higher-end segment.

Verdure at Holland Road was among the first upmarket projects to launch amid some uncertainty. When it achieved strong sales, other developers began to push out their projects. In all, developers sold over 10,000 units between January and July this year.

There are two key differences between now and 2007 - what drove the sales, and the price levels set. The earlier boom was driven by foreigners, and the buying helped set new record prices. It was also a bull run that was long overdue. After the Sars crisis in 2003, the market had taken three long years to recover and eventually saw its peak in Q1 2008.

Today, prices are closer to the levels of Q4 2006. When prices are at this level, the number of buyers begins to rise. The increased sales strongly suggest that buyers are convinced property prices have bottomed, or are low enough for them to re-enter the market.

Now that prices have been rising for some months, the question is: Have they reached the peak of 2007/2008?

The table shows a basket of projects sold from 2007 to 2009, comprising a mix of completed and uncompleted projects in districts 9, 10 and 11.

It shows that the highest prices were achieved in 2008, with a handful of projects hitting their highs in 2007. This analysis shows that prices today have yet to reach the previous peak, nor are they anywhere close. This coincides with the Core Central Region (CCR) price index of Q2 2009, which shows we are still 28 per cent off the peak of Q1 2008.

To reinforce the point, we compare prices of recent launches to other projects in the vicinity. Some examples are:

So it is the recent spike in property launches and the stunning take-up that has given rise to the perception that speculators are back in full force. But are they?

Speculation is best measured by the number of sub-sales in the market, as speculators are unlikely to hold on to their properties beyond three months. Speculative activity prompted the government to abolish the deferred payment scheme in 2007. Today, it is the interest absorption scheme (IAS) that has been withdrawn.

However, the impact is expected to be minimal as recent projects that did well - among them, Madison Residences, Viva, Volari, Sophia Residences, One Devonshire, Ascentia Sky, The Wharf Residences and Martin Place Residences - saw only an estimated 10-30 per cent of buyers taking up the scheme.

In fact, projects such as Ferrell Residences, The Trizon and Nathan Residences do not offer IAS and their sales have not been affected.

But we notice that some short- term investors have made their appearance at mid-tier launches, especially for units priced around $800,000 and below.

However, the majority of these buyers bought their units under the progressive payment scheme. This shows that they are prepared to take on a bank loan and service instalments. This is certainly not the pattern of a typical speculator.

Is the recovery sustainable?

The current market has outperformed expectations, to the surprise of observers who could not have envisaged such a recovery six months ago. While some wonder if a bubble is forming, we feel reassured by the fact that most buyers in this upturn are upgraders and genuine home owners, going by the reception to mass-market launches.

The rental market has softened over the past year and has dropped 20 per cent from its peak in Q2 2008. The rental yield had ranged from 4-7 per cent in the last three years. We expect yields to drop to 2-4 per cent from here. Is this bad? Not necessarily, as the market has traditionally offered these lower ranges.

In the primary market, mass-market projects have been pushed out so quickly that there are few remaining parcels left in the pipeline. The confirmed land sales, which will resume next year, is timely, and if carried out in a measured manner, will provide a steady supply of launches and corresponding take-up.

The stock market, after a turbulent year, has finally stabilised. Employment is also expected to improve as firms start hiring again.

We expect prices to stabilise from here after recovering from the under- valuation at the start of the year. Prices are expected to start rising again in mid-2010 when the two integrated resorts are due to be completed.

The market had benefited from the 'IR effect' when it was announced in 2006 and the excitement continued to boost the market into 2007.

Now, with the impending completion of the two mega projects, we believe the market will once again be able to capitalise on the buzz, leading property prices higher by 10-15 per cent.