The 224,303 square foot plot, which was triggered for release from the government's reserve list, can be developed into a condo of up to 20 storeys with about 400 units. 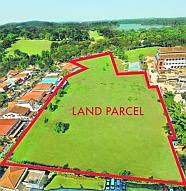 The land parcel's minimum price is $82 million or $174 per square foot of potential gross floor area, although property consultants expect top bids to come in much higher - at $300 to $425 psf per plot ratio (psf ppr). They reckon a new condo on the site could fetch an average selling price of about $800-1,000 psf.

The second offering is a 28,167 sq ft freehold plot put on the market through a collective sale of The Meyer Place in District 15. The reserve price is said to be $65 million, which works out to about $1,150 psf ppr including an estimated $3 million development charge.

The site is zoned for residential use and has a 2.1 plot ratio under Master Plan 2008.

The Meyer Place was completed in the early 1990s and comprises a total 28 apartments - 24 units in a 13-storey block and four in a conservation house that was once the residence of the late rubber tycoon Tan Lark Sye, who set up Nanyang University.

Cushman & Wakefield managing director Donald Han, whose firm is marketing The Meyer Place, describes the property as a 'bite-sized offering in a prized location'.

'Sites costing less than $100 million provide a comfortable entry level for developers and there are already a few foreign developers evaluating the property,' he added.

The tender for The Meyer Place closes on Oct 28.

The Urban Redevelopment Authority (URA) said yesterday that it would launch the tender for the Upper Thomson Road site in about two weeks. The tender period will be about four weeks.

This is the fifth site that can be developed into private housing to have been triggered from the government's reserve list since July.

The property consultancy group's South-east Asia research head, Chua Chor Hoon, predicts top bids of $300-350 psf ppr for the plot, with a likely average selling price of $850-900 psf for the project. 'It's a pretty attractive site, with lots of greenery, and it's near Ai Tong School,' she added.

URA said that the proposed residential development on the land parcel can be built up to 20 storeys. However, part of the development fronting Upper Thomson Road will be subject to a building height control of four storeys.

Knight Frank chairman Tan Tiong Cheng predicts that a new condo on the site could sell at an average price of about $900-1,000 psf, and forecasts land bids of $350-400 psf ppr for the site, resulting in a breakeven cost of around $800 psf.

'The plot is in an established residential area. Residents in the new development can walk to Bishan Park and Lower Peirce Reservoir Park. There are eating facilities nearby, for instance, at Thomson Plaza,' he said.

UOL's Meadows @ Peirce, a freehold project along Upper Thomson Road, is selling at an average price of about $900 psf but it is further from town than the latest URA plot.

CB Richard Ellis executive director Li Hiaw Ho said that URA's site will be hotly contested and probably draw over 10 bids. The winning bid is likely to be in the $375-425 psf ppr range, he added. 'The developer could probably launch a new project at $800-850 psf.'

Market watchers suggest that developers may continue to apply for the release of more sites in the H2 2009 reserve list, notwithstanding the fact that the government last Monday said that it would restart land sales in the confirmed list in the first half of 2010 and also enhance supply in the reserve list for the same period.

Developers that have exhausted mass to mid-range sites in their landbanks may find it opportune to buy a site now, as they will have a headstart in terms of launching projects over those who manage to buy sites only next year.

Analysts say that private housing demand from genuine investors and owner-occupiers is expected to remain firm in the face of low interest rates, ample liquidity and brightening economic horizon.

Reserve list sites are launched only upon successful application by a developer that commits to a minimum bid price acceptable to the government. On the other hand, confirmed list sites are released according to a pre-stated schedule.