Landed homes the way to go

Buyers took advantage of lower prices, which have corrected by some 20 to 30% from the peak, and low interest rates to buy their dream landed homes

A HOME these days has become more of a lifestyle statement and status symbol than just a roof over one's head. And what could answer both aspirations better than a plot of freehold land where the owner can dictate every last detail in a custom built house?

So is it too late to go shopping for a landed property today? Let's look at how the market has been performing this year. 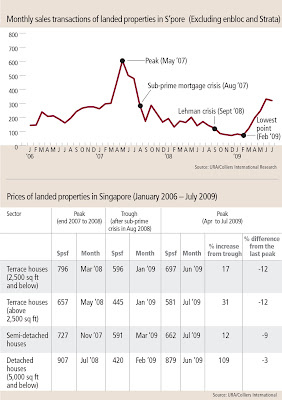 The landed market has seen a recovery in transactions, with the turning point in March this year. After hitting a low in February, when only 73 units changed hands, March saw 123 units done. This figure then increased by leaps and bounds, from 247 units in May to 331 units in June and 320 in July.

Buyers took advantage of lower prices, which have corrected by some 20 to 30 per cent from the peak, and low interest rates to buy their dream landed homes. With the recovery in volumes, is a price recovery in sight?

Landed home prices had peaked between late 2007 and the first part of 2008 before trending down as the sub-prime debacle hit.

It saw a low between January and March this year but with the recovery of the stock market, sentiment improved and landed home prices began to pick up in April.

Despite the upward trend, prices as at July were still some 11 per cent below the previous peak. The only exception is detached houses, whose prices are close to the 2007 peak. We look at some of the reasons behind the demand for landed homes.

For the same price, a buyer may be able to get just a 1,300 sq ft three-bedroom leasehold condominium in the primary market. This can be seen from the recent launch of Centro, a condominium in Ang Mo Kio, with prices averaging around $1,200 per sq ft (psf).


In fact, some owners so enjoy dictating the design and materials for their house that they get very involved in liaising with the architect, contractor and interior designer. The completed project gives the owner an added sense of pride and satisfaction.

Most are just a five- to 15-minute walk to the train station. One can also find food and retail outlets integrated with the MRT station or transportation hub. An example is the upcoming shopping mall 'nex', located above Serangoon MRT station and next to a bus interchange.

The accessibility has made landed properties more desirable and has changed the perception that they are not as conveniently located as apartments.

Is the demand sustainable?

Landed properties are likely to retain their popularity among Singaporeans. However, whether the transaction volume can be sustained will depend on the price expectations set by the sellers.

Despite the recovery in April, transacted volumes and prices are still below the peak. The 320 units transacted in July were about half of the 605 units done during the peak in May 2007.

Prices in the current market are still some 11 per cent (excluding detached houses) off those seen during the peak. For instance, in June this year, the average price of a landed terrace house below 2,500 sq ft was about $697 psf, compared to $796 psf seen during the peak in March 2008.

With the continued economic recovery and improved market sentiment, prices could continue to rise. However, as the economy is not yet out of the woods and wage increases are not expected to be strong, there is a cap on how much buyers can or will pay.

Price increments may slow from the 12-31 per cent registered in the earlier months of the year to a more gradual pace of 5-8 per cent in the next 12 months.