A look at the leaders of subsale market this year

Centris has the most profitable subsales; Montebleu tops in loss-making deals

THE Centris in Jurong West has the highest number of profitable subsale transactions so far this year.

Savills Singapore found that 69 units in the development have changed hands in the subsale market since the start of the year at higher prices than previously for the same units.

One Amber in Katong has the second highest number of profitable subsales at 63, followed by 58 at The Metropolitan Condo in Alexandra Road, 55 at Casa Merah, 44 for The Quartz in the Buangkok area, and 41 for Carabelle at West Coast Way. 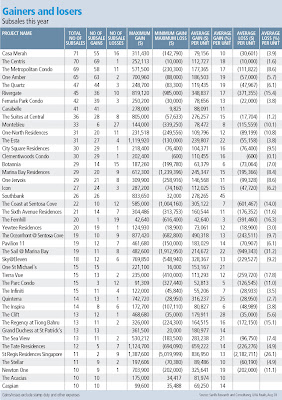 In all these projects, there were more profitable subsale deals than loss-making ones this year. In fact, Carabelle did not have any loss-making subsale transactions this year.

Savills' analysis was based on URA Realis caveats information as at Aug 28 this year.

However, some projects saw more loss-making subsale deals than profitable ones during the study period. Examples include Montebleu in the Balestier area, which had 27 subsale losses against six subsale gains; The Coast at Sentosa Cove (12 losses versus 10 gainers); The Parc Condo at West Coast Walk (12 losses versus three gainers); and St Regis Residences (nine losses versus two gainers).

For Montebleu, most of those who divested in the subsale market this year had bought their units from the project's developer in 2007. For the 27 owners who sold their units in the project at a loss this year, the average loss per unit was about $115,600 or 10.1 per cent.

Over at Sentosa Cove, for the dozen loss-making subsales at The Coast, the average loss was about $601,500 or 14 per cent. The sellers had bought their units in the 2006-2007 period, some from the developer and some from the subsale market.

In the Central Business District, The Sail @ Marina Bay saw eight subsale losses and the average loss per unit was about $949,000 or 31.2 per cent. There were 11 subsale gain cases in the development, and their average profit per unit was $214,700 or 22 per cent.

Subsales refer to secondary market transactions in projects that have yet to receive Certificate of Statutory Completion. This can take place three to 12 months after Temporary Occupation Permit (TOP).

A flurry of subsale activity often sets into developments around the time they receive TOP, when projects have the added appeal to buyers looking for properties that they can move into or rent out soon. Casa Merah, The Centris, The Metropolitan Condo, The Quartz, Rivergate and Carabelle are examples of projects that have received TOP this year.

'Another trigger for subsale activity can be the launch of newer projects nearby,' notes Savills Residential director Phylicia Ang.

Agreeing, Knight Frank executive director Peter Ow says: 'A new launch can help push up the value of projects launched a few years ago in the area. Those who bought units at the earlier development at lower prices may find it opportune to cash out.'

For instance, Casa Merah received TOP in July, around the same time that Optima nearby was released. Ferraria Park, another popular project in the subsale market this year which has just received TOP, is located near The Gale, which sold like hot cakes at its preview in July.

A developer said that the level of speculative activity a project attracts would usually be in tandem with primary market buying momentum.

Another factor is the product itself. A project in the suburbs with a bigger proportion of larger, family-sized units may be less appealing to speculators than one in town with mostly smallish units.

'Potential speculators have to look at the next person they can flip their unit to and ask themselves: 'why would the next person want to buy this unit from me?' Perhaps there's further capital upside or the unit is easy to rent out,' the developer added.