How much does a playground cost? 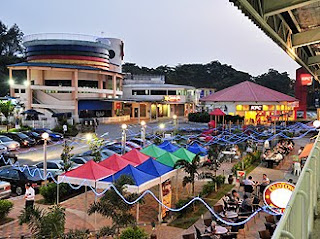 In the case of the Playground@Big Splash, a cool $24 million, and it is up for sale.

Its owner, The Seafood International Market and Restaurant, is cashing out because the 3ha place is not its core business.

Mr Justin Tan, the director of the company, which also owns a seafood eatery on the East Coast Parkway site, said: 'Our project to overhaul it started three years ago but this is our non-core business as we're essentially an F&B (food and beverage) brand.

'Now the timing seems good to divest and focus on our other F&B ventures. We had actually planned to sell it one or two years later, but before we put up the ads, there were interested parties calling us, which was a push factor to accelerate this plan.'

The original Big Splash, which came with a landmark water slide, was developed by the Goldhill Group and opened in 1976.

When its 30-year lease expired in 2006, Seafood International, then the complex's anchor tenant, tendered for the site from the National Parks Board.

It spent more than $10 million to upgrade the site.

CB Richard Ellis is helping to market the 20-tenant property.

Mr Tan said while Seafood International experienced a decline in business due to the downturn, he feels that the other tenants have been generally unaffected.

'Business seems to be steady for most. Chiltern House pre-school has a fairly long wait list, and Sushi Tei, 1 Twenty Six and OldTown White Coffee are doing very well,' he noted.

The other three establishments are in F&B.

Parking revenue last month also went up by about 15 per cent.

Tenants were mostly unaware of Seafood International's intention to sell the site but agreed that they are happy with business.

Ms Fiona Walker, principal director of Chiltern House, said: 'Our business has grown steadily since we moved there in 2007. With the demand in the East Coast, we are opening another centre nearby to accommodate those waiting for a place.'

'Since the revamp in 2006, our traffic has gone up 100 per cent. Compared with our Pasir Ris branch, most of our business is here,' he said.

'I think the site has huge potential which has not been fully explored. Selling the site is the landlord's prerogative but I hope whoever takes over will also work as a team with us,' he said.

'There's no rush to sell. Price is definitely a deciding factor but we also hope to find a sophisticated investor who can come in and improve the place even more,' he said.

'As a company that will potentially lease back over 30 per cent of the site, we really hope for that.