As buyer interest returns to the market, we can expect to see increased activity from institutional investors drive up transactions next year

INVESTMENT sales have been rising steadily throughout the year. From $304 million in the first quarter, transactions have jumped more than tenfold to $3.1 billion by Q3 of 2009. While we expect total transactions this year to be far below the 2008 total of $17.9 billion, coming in the wake of the global financial crisis, it will still be a credible result. Nearly half of the transactions have come from the residential sector while the commercial real estate sector makes up the remainder. 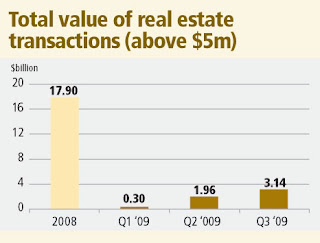 Unlike the red hot residential segment, transaction volume in the commercial segment has occurred at a more measured pace. There was a 10-month lull in the office market before it stirred with the sale of Parakou Building and Anson House in April this year. Parakou was sold for $81.38 million, or $1,287 per square foot (psf) while Anson House transacted at $85 million with a psf price of $1,100.

VTB Building, Cecil House and Aviva Building were later sold for between $710 and $1,061 psf at transaction sizes between $36 million and $71 million, all to the same buyer. The buyer, a joint venture between Yi Kai Group and Fission Group, plans to redevelop the offices into a residential project, subject to approval. In the hospitality sector, the 50-room Hotel Nostalgia was sold for $22 million, or $440,000 per room - which represents a new high for boutique hotels.

These transactions, which led the resumption of the commercial investment market, had several common threads. The buyers were all private money, willing to put up higher levels of equity, and transaction sizes were below $100 million. In other words, they were nimble investors able to tap opportunities when others could not.

With the equity market rebound driving down distribution yields and the improved sentiment creating generally looser credit conditions, we expect to see Reits become more active in the investment market. They will want to take advantage of opportunities for structuring yield accretive acquisitions that will increasingly become more accessible with the recovering markets. The recovery extended to land sales as more developers replenished their land banks. They were apparently unfazed by measures the government took this month to cool the residential market.

A government land sale of a mixed residential/commercial site late last week saw a bid by Far East Organization at $376 psf of potential gross floor area. This was significantly higher than what the market expected. As buyer interest returns to the market, we expect to see in 2010, increased activity from institutional investors, both local and foreign, driving up transaction volumes.

The expectation early this year that pressured sellers would flood the market with assets did not materialise. With a significant amount of debt refinancing coming due this year, the expectation was that owners facing refinancing difficulties would have to sell. But property owners were able to manage those pressures through a mixture of renewed bank lending and cash calls from the equity market.

As the Monetary Authority of Singapore's monthly banking survey shows, lending to businesses in the building and construction industry has remained stable with $50 billion in lending in January dropping slightly to $48 billion in July. With sellers gaining confidence, we have anecdotal evidence of asking prices being raised in the past couple of months.

An analysis of strata titled office transactions in Suntec City and The Central gives some indication that prime office capital values may have bottomed out and have started to rise. Transactions which clustered around the $1,400 psf mark in June/July have now risen to $1,600-$1,700 psf. This corroborates well with K-Reit's $1,579 psf acquisition price for Prudential Towers in September.

While a dearth of transactions makes definitive analysis difficult for some segments of the commercial real estate market, the evidence does suggest that capital values for prime retail and hotel assets may have also bottomed out.

Transactions in the diverse industrial sector show an uneven trend but support the idea that valuations may remain soft. A vibrant commercial real estate investment market will emerge when the fundamentals of tenant demand and supply (and hence vacancy and rents) support the investment case.

On the supply side, the pipeline of new space over the next three to five years is transparent and generally predictable. Demand has historically been shown to correlate with various macroeconomic indicators of the Singapore economy. Singapore's growth potential over the medium term is therefore important to the outlook of the commercial real estate investment market.

The good news is that consensus opinion believes global economic growth coming out of this slowdown would be centred in Asia. Singapore is well-positioned to ride this geographical advantage, as evidenced by our ranking as the third most competitive economy in the recently released World Economic Forum survey. Hence, there are grounds to believe that demand for commercial space will grow robustly over the next few years.

With this in mind, we think it is important to point out that as severe as the oversupply in some segments of the commercial market are, our simulations show that had Singapore not tipped into a recession, the new space would have been well absorbed. This suggests that the current challenges in the market are temporal rather than structural.

As the Singapore real estate market moves past these challenges, we see the continued strengthening of Singapore as a wealth management hub and the introduction of the integrated resorts as potential demand drivers across a broad spectrum of real estate assets. Myriad investment opportunities in the office, retail and hospitality segments will emerge as a result. Before long, we expect to see the return of a healthy investment market.