In contrast with 2006 and 2007, the current run is not supported by a buoyant economy and buyers will resist paying too much cash

WITH 80 per cent of Singapore's population staying in HDB flats, one would expect the HDB market to be affected by the current recession and unemployment situation. But both the primary and secondary HDB markets appear unscathed by the current crisis. Can we expect this to continue? 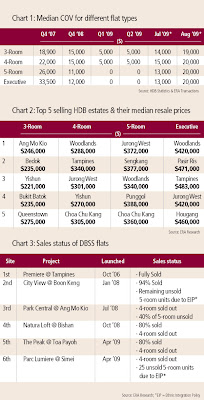 Current resale prices are some 2.4 per cent higher than the Q4 1996 peak. This means HDB homeowners who had bought their flats during those times can now get more than they paid if they resell their flats. Quarter-on-quarter, Q2 data show that the price increase has tapered off to just 1.4 per cent compared to the average quarterly increase of 4 per cent for 2007 and 2008.

However, the surge in resale HDB transactions that started in Q2 carried through into Q3. Transactions done by ERA's agents, who collectively have a 45 per cent share of the HDB resale market, show that resale prices have gained some 3 per cent in Q3 over Q2.

With the momentum likely to continue to year-end, we are likely to see a similar price increase of 2-3 per cent in the final quarter. For the whole year, HDB resale prices would probably have increased by 7-8 per cent.

Cash-Over-Valuation (COV) is the amount that a buyer pays over and above the valuation of a flat and this amount cannot come from a home loan or from the Central Provident Fund (CPF). The higher the COV demanded by sellers, the more cash the buyer has to fork out.

Eighty-six per cent of the company's HDB resale transactions were concluded with COV; while 9 per cent were done at valuation; and only 5 per cent below valuation.

With strong resale demand, COV is likely to continue trending up for the rest of the year and perhaps into 2010. But as Singapore's economy is just starting to recover, current COV increases are largely driven by pent- up demand and are likely to taper off once they reach the resistance level. In contrast with 2006 and 2007, the current run is not supported by a buoyant economy and buyers will resist paying too much cash for HDB resale flats. HDB has been monitoring the situation closely and it tries to balance the market with affordable housing options like more new flats that target predominantly the first-timers.

Based on resale transactions thus far, the popular locations and the respective resale prices for the various flat-types can be seen in Chart 2.

Who are the buyers?

The surge in demand for HDB resale flats has been fuelled by a mix of upgraders, downgraders and the increasing population of permanent residents (PRs).

Those who are financially stable upgrade to larger flats while those facing financial constraints have been downgrading. The government's target population of 6.5 million is steadily increasing the pool of PRs; and they have to buy their HDB homes from the resale market as they do not qualify to buy new flats directly from HDB.

ERA's resale transactions show that PR buyers make up some 40 per cent compared to 20 per cent three years ago. They typically buy 3- or 4-room flats and may upgrade to 5-room flats once they obtain their citizenships.

So far this year, HDB has launched some 3,900 new flats under its Build- To-Order (BTO) programme. Of the 3,900 units launched this year, some 2,400 units or 62 per cent are in Punggol. Work on the Punggol Promenade has just commenced to transform it into an attractive waterfront precinct with an array of leisure activities.

BTO flats are usually priced a shade lower than similar resale flats in the same locality. First-time buyers are attracted to these flats as they can be fully funded by CPF funds and loans from HDB or banks.

Responding to demand, HDB has been stepping up its BTO launches with some 4,000 units in 2007 and 7,800 units in 2008. With the aim of keeping housing affordable especially for first-timers, HDB has indicated that it may launch up to 8,000 units this year.

The take-up for BTO launches has been good as first-timers prefer to buy direct from HDB rather than in the resale market where a majority of the deals are done with COV.

Under the Design, Build and Sell Scheme (DBSS), private developers have launched and sold six projects since 2006. Their sales status is in Chart 3.

Priced at about $450,000 to $750,000, DBSS flats are more likely to attract buyers who intend to buy another new flat after they have become eligible to sell the first one that they had bought from HDB. This is because they need not pay any resale levy on their first flat when they buy DBSS flats.

Except for the first project, Premiere @ Tampines, that has been fully sold, the other five projects have sold out their 4-room flats, while some of their 5-room types have yet to find buyers. These are likely to take slightly longer to sell due to higher prices or the Ethnic Integration Policy (EIP).

Due to their different price ranges, both BTO and DBSS flats target predominantly first-timers and second- timers respectively; and are unlikely to cannibalise each other.

Going forward, HDB monitors new flat demand closely and will accordingly launch more BTO flats or put more DBSS sites on sale when necessary. As demand is strong for both types, we are likely to see more releases this year.

As Singapore's economic and employment numbers improve, we are likely to see the current buzz in the HDB market continue well into next year. Resale prices are expected to increase further.

Unlike the private residential property market, the movement of HDB flat prices is more gradual. We are likely to see overall price increases of 7-8 per cent this year and next year, supported by increasing valuations.

COV transactions will probably stabilise, with the bulk of resale transactions closing at $15,000-$30,000 above valuation as buyers resist paying too much in cash.

With more new flats coming onstream, some demand is likely to be taken away from the resale market. Resale volume is likely to stabilise around 30,000-33,000 units for 2009 and 2010.