Can a mass market recovery be sustained?

Due to lower interest rates, affordability for mass market resale condominiums has improved compared with the peak in Q4 2007

MASS market projects, which were laggards in the 2007 boom, are leading the recovery this time round. In 2005 and 2006, only 36 per cent of the private residential transactions were for private homes outside the central region (OCR). In comparison, 48 per cent of transactions in H1 2009 were for homes in OCR (Chart 1). 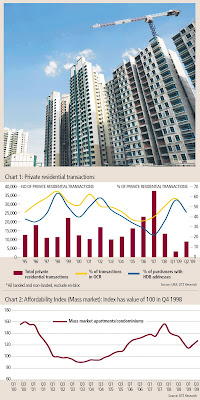 In 2007, demand for homes in OCR rose to 40 per cent of total private residential transactions. However, as the average price of mass market resale condominiums shot up by 26 per cent that year, buyers with HDB addresses accounted for a historical low of 22 per cent of transactions (Chart 1).

This resulted in pent-up demand among this group of buyers who saw their chance when developers started to launch mass market projects at competitive prices in Q1 2009. Buyers with HDB addresses accounted for 56 per cent of transactions in Q1 2009.

The projected completion of private homes from 2009-2013 is estimated to be 11,313 units per annum, 31 per cent higher than the past 10- year average of 8,671 units. However, this has to be seen in the context of less overall housing supply since the Housing and Development Board (HDB) switched to the build-to-order (BTO) system in 2001.

Compared to 1996-2000, which saw 43,000 homes (both private and public) completed per annum, the number of homes completed in the past five years plummeted 70 per cent to around 13,500 units per annum as the HDB cut back on the building of public homes.

On the demand side, the resident population grew steadily at a compounded annual rate of 1.4 per cent over 1996-2008. In 2008, the net increase in resident population was 59,600. Assuming an average household size of 3.5 persons, this could translate to a housing demand of 17,000 units.

Demand for subsidised flats was evident when the half-yearly sale exercise of HDB three-room premium, four-room and bigger flats in April was over-subscribed by 23 times. The four- and five-room flats in Punggol and Sengkang in the June-August BTOs saw four to seven applications for every unit offered. Unsuccessful applicants could switch to buying resale HDB flats or mass market private homes. The demand for resale HDB flats would also spill over to the private property segment as existing owners of HDB flats upgrade to private homes.

With increased demand, prices started to rise from the lows early this year. The average price of a three-bedroom mass market resale unit rose 7.1 per cent to $605 per sq ft (psf) in Q3 2009, just 0.8 per cent below the previous peak in Q4 2007.

Nevertheless, due to lower interest rates, affordability for mass market resale condominiums has improved compared with the peak in Q4 2007. Based on the average price of $605 psf for a three-bedroom unit today, a household in the 71st to 80th decile would need to spend 26-29 per cent of its gross monthly household income on instalments should it take up an 80 per cent loan.

This is below the recommended 30 per cent threshold for comfortable repayments. Since 80 per cent of Singaporeans live in public housing, the average household income in the 71st to 80th decile serves as a benchmark for affordability of first-time buyers as well as HDB upgraders.

However, compared with Q2 2003, mass market resale condominiums in Q3 2009 are less affordable (Chart 2). This is mainly due to the lower property prices in 2003. The average price of a three-bedroom unit was $440 psf in Q2 2003. Prices of new mass market units in Q2-Q3 2009 have risen faster than those in the secondary market. In Q1 2009 when Caspian was launched, it was priced at a median $603 psf, just 8 per cent higher than the four-year old Lakeholmz beside it.

However, recent launches were priced 15-65 per cent higher than comparable developments in the vicinity that were less than five years old. The current average price of $900-$1,000 psf for new mass market units was only seen in 1996 and 2007 during the height of the property boom.

Based on an average price of $900 psf for a new three-bedroom mass market unit, a household in the 71st to 80th decile would need to spend 38-43 per cent of its monthly income on instalments for an 80 per cent loan.

Singapore has a more convincing growth story today than in the past. With its growing stature as a global city and significant structural changes, the city is attracting investors who believe it has further upside in the long term. However, there will be cycles tied to economic performance and external shocks. Private home prices here will not rise indefinitely due to land scarcity, as some panic-stricken house hunters are led to believe.

Most of those who bought new mass market condominiums during the 1996 peak are still sitting on paper losses. An analysis of condominiums launched in OCR in 1996 showed that the median prices of 90 per cent of the developments were below their launch prices even during the 2007 peak.

The Singapore economy has performed better than expected this year but it could be largely due to the stimulus spending by governments around the world. More private consumption, especially in the US, would have to underpin economic growth in 2010 and beyond, for the residential market recovery to be sustainable.

With the recent cooling measures in place to curb speculation, the buying frenzy is expected to moderate, leading to more stable prices.

The writer is DTZ's head of South-east Asia research