Go back to basics for affordable flats 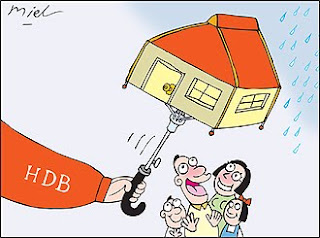 WHAT does 'affordable' mean?

With rising home prices hitting headlines in recent weeks, Singaporeans are falling over themselves trying to pin down affordability.

The Government, which built its reputation housing a nation, has defended its record. It says that public housing is affordable because new home owners use less than 30 per cent of their income to service their housing loans.

While this is persuasive, public scepticism has been just as strong. The gap exists because there is no agreement on what 'affordability' means.

The Government feels flats are affordable because those who applied for them will not be paying through their noses. But this, however, does not take into account home seekers priced out of these flats in the first place.

Many home seekers, meanwhile, feel aggrieved because an HDB flat that does not require a long commute to work is getting out of reach.

The HDB's pricing system for new flats has also caused suspicion. New flats are priced at a discount from their market value, but this figure - as well as the size of the discount - has never been revealed. What is known is that the HDB bases the market value on the resale price of similar flats in the area. This means new flat prices can be affected by the speculative bubbles that emerge in the wider market. Enhancements made to new flats over the years have also raised prices.

In July's batch of new premium flats offered in Punggol - which comes with timber and ceramic flooring and toilet fittings - four-room flats were going for a top price of $322,000. This is just $2,500 shy of the median resale price of four-room flats in the same town from April to June.

The response of the authorities to all these? It all boils down to home owners' expectations, they say. Lower your expectations, live further away from town, or buy a smaller flat.

But perhaps it is time to take a hard look at the HDB's increasingly conflicting mandates. In a Sept 14 letter to The Straits Times Forum page, the HDB said its 'key responsibilities are to help first-time home buyers and to ensure flat values are sustained over the long term'.

The HDB undoubtedly had an easier time accomplishing these goals in its early days, when flat owners were largely resettled families who had not quite caught on to the income-generating potential of their homes. Both of the HDB's goals could then be met rather easily by giving subsidies, keeping estates well maintained, and upgrading them over time.

Today, with the buying, selling and renting of HDB flats supporting an industry, it has become more difficult for the HDB to meet its goals.

The humble flat today is a shelter, an asset, as well as a source of rental and retirement income with the Board's lease buyback scheme. A flat owner who moves on to a bigger home is entitled to a second subsidised home loan from the Board, while others who sell their first subsidised flat can go back for a second if they pay a levy. The benefits are substantial once someone gets his foot in.

But this cradle-to-grave system has also raised expectations about how much money flat owners can make from their property. People have come to expect that their flat values will rise - indefinitely. They do not seem to realise that this rise has to, to some extent, come at the expense of home seekers down the line. But just like passengers on a plane, they hope it will take off once they get on it.

Such expectations - supported by the HDB's mandate to sustain flat values - also prevent the housing authority from building too many new flats at any one point in time. If the Board builds enough to satisfy quickly the demand of all home seekers, prices in the resale market will fall.

It was not too long ago that flat owners in Sengkang complained that the surplus of new flats created by the Asian financial crisis was suppressing the value of their homes. But the pendulum these days may have swung too far against the interests of home seekers.

What this means is that the HDB may be forced to prioritise one of its two mandates: Should it focus on helping home seekers own homes, or should it focus on protecting the value of the existing flats of existing home owners?

The Board cannot abandon either goal without political consequences. But it cannot achieve both in equal measure either.

It need not look far for clues about the way out. Former HDB chief executive Niam Chiang Meng declared in 2003 that the Board was going back to basics to improve the workmanship on its flats. Over the next few years, the Board cut out the more elaborate features in its upgrading programmes and focused instead on practical improvements like plugging ceiling leaks.

Why not apply this back-to-basics approach to the HDB's goals: Provide shelter first before worrying about the values of existing flats?

The HDB could also slowly dismantle the systems that feed into the unreasonable expectations of home owners. For example, eligible households might be limited to just one subsidised flat, or just one housing subsidy, so as to wean people from the assumption that huge profits automatically await every flat owner.

Flat owners, meanwhile, have to realise that there are limits to how far public housing can be commercialised. They certainly cannot demand that the value of their properties appreciate - or even be protected - under any circumstances.

After all, they were all home seekers once, looking for that same leg up on the property ladder as the people who are starting off now.