London still the place to be

Singapore and Asian investors now see the City as a safe long-term investment, and as long as the sterling is low they will be buying

THE UK property market is waking up, prices are rising and the British pound is regaining its strength. The good news is that there are still bargains to be had for astute overseas investors. 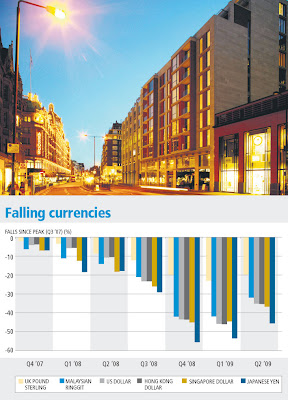 The first recommendation for buyers is to get an opinion, via a friend or relative in the UK, to check if the location really is where it should be - that is, '24 minutes from Bond Street', or 'within easy reach of London's top schools'.

Many buyers may be tempted into a purchase that, while looking like great value on paper, would offer little opportunity for capital growth and is probably not attractive to tenants. Having said that, there are still opportunities to be had, especially in the established locations, to make the Singapore dollar sweat against the pound sterling.

According to the latest quarterly index from Savills Research, prime central London prices rose by 4.3 per cent in the three months to June, effectively wiping out the falls seen in the first quarter. By any measure, this is a significant quarterly growth.

However, we will wait to see if the recent market rises are indeed the start of a more sustained recovery or the housing market equivalent of the pre-Christmas buying frenzy for a must-have toy.

In the early part of this year, buyers were waiting for signs that the market was sufficiently close to the bottom before they committed to buying. This meant that prices had to fall by as much as 25 per cent before deals were struck. There were, without doubt, a few who picked up good bargains which they can now be proud of.

As things stand, going into autumn, the market continues to gather momentum and a shortage of good prime stock, rising buyer interest and increased stability in central London residential rents is likely to add further to market confidence. The fortunes of the London residential market, in particular, are heavily reliant on City buyers walking into London estate agents offering cash.

An improvement in the economic outlook and city employment projections in particular would ensure that this momentum is carried though to 2010, allowing the current level of pricing to be sustained.

Irrespective of short-term price movements, we consider that improved underlying purchaser activity means we are into the first stages of recovery in the prime central London market and this sector will eventually lead the rest of the UK residential market into recovery. Thus, international investors considering purchasing in the UK would do well to start looking in earnest now before prices inch up further.

International buyers have been very much in evidence in the prime central London market since the end of 2008, recognising that the fall in capital values, combined with the softer sterling, makes prime residential property an attractive investment proposition.

Based on prime central London capital values at end-June, the discount from the peak for foreign currency buyers is currently around 35 per cent for US dollar buyers, and 37 per cent for Singapore dollar buyers. Since the sterling's drop earlier this year, the number of buyers from Singapore has increased. Many investors from Singapore have bought sterling at its low point and are ready to get into the market.

It is the first time in many years that a residential property in central London has looked this affordable. Singapore and Asian investors now see London as a safe long-term investment, and as long as the sterling is low they will be buying.

While this represents a significant saving from the peak, international buyers seeking to catch the bottom of the market will need to watch market movements carefully. There is a sense among buyers who are active in the market that prices for the best properties will not fall any further, and that bricks and mortar once again represent a sound investment opportunity.

These investors are savvy, knowing where and what they want to buy. It has to be prime central London with good rental investment or long-term returns. They could also be buying for their children in key areas close to London's main universities. Prices in and around Central London vary from £800 to £1,200 per sq ft depending on area and location.

Savills numbers show that international buyers have accounted for 51 per cent of all buyers since the beginning of the year, up from 44 per cent in 2008.

The indices are quarterly, and the latest statistics cover April to June when prime central London values rose by 4.3 per cent, bringing the year-on-year price falls to just -12.2 per cent, or -19.8 per cent from the peak. Apartments were up 3.8 per cent in the quarter and houses up 4.8 per cent, which illustrates how the market is coming back.

The super prime bracket, an average of £5 million (S$11.6 million), was up 4.8 per cent. According to our indices, some of the greatest quarterly growth was seen in Mayfair, Belgravia, Knightsbridge and Chelsea at 5.9 per cent. However, the biggest rise has been seen in southwest London (Putney, Barnes, Wandsworth, Fulham, Richmond) at 7.3 per cent in the quarter.

Savills Knightsbridge office was one of the first London agents to report international buyer interest at the end of 2008. Reports from the sales team noted 'seeing a lot of international buyers in the market, particularly from Europe, with transaction levels in the summer roughly double the levels seen in April/May'.

International buyers account for around 70 per cent of the inquiries received for the best addresses (Knightsbridge, Kensington, Chelsea), but around 50 per cent of actual sales. There is an increasing number of British buyers who clearly hold foreign currency and so benefit from the falls in sterling.

So is it a sustained growth or a pre-Christmas buying spree? Only time will tell. It was investors from Singapore and South-east Asia that had the foresight to see the opportunity in the early 1990s and one would be brave to dismiss their ability to get it right this time around as well.