RESORTS World at Sentosa (RWS) is banking on the appeal of two mega-movie franchises - Shrek and Madagascar - to draw the crowds to its theme park when it opens in first quarter of next year. 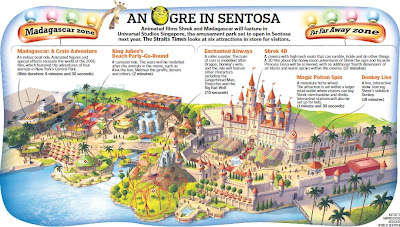 Six attractions at the integrated resort's (IR's) 20ha Universal Studios theme park will be based on the storylines of the two DreamWorks Animation films, according to details released yesterday by the developer.

Visitors will get to see sets and characters from Shrek come to life, including the Far Far Away Castle belonging to Princess Fiona's father. They will also get to experience rides based on the adventures of four animals from New York's Central Park Zoo who are shipped to Africa by accident and left stranded on Madagascar.

There will be more than 10 retail and dining outlets done up in the same themes as the two respective zones.

The two movies are among DreamWorks' most successful box office hits, with Shrek and its two sequels grossing over US$2 billion (S$2.8 billion) worldwide, and the first Madagascar film alone taking in $500 million.

Prices for the theme park will be announced later, but The Straits Times understands they are likely to be on par with, or even cheaper than, tickets to Universal Studios theme parks elsewhere. A day pass to the park in Orlando costs US$70 and Osaka charges 6,000 yen (S$92).

The theme park - the first of its kind in South-east Asia - is expected to be one of the IR's biggest draws. The second IR, the Marina Bay Sands, is gunning for well-heeled business travellers.

Details of 18 other attractions at the Sentosa IR's remaining five zones - Sci-Fi City, Ancient Egypt, The Lost World, New York and Hollywood - will be announced later.

An RWS spokesman said the IR is on track for its soft opening in first quarter of next year.