REAL estate companies in Singapore and the rest of Asia are now placing greater emphasis on winning awards that give their projects - as well as the developer the award-winning properties are associated with - an international stamp of quality.

Entrants are evaluated on five criteria: global concept, architecture and design, development and construction, community benefit and environmental impact, and financials and marketing. The FIABCI award is especially prized as a project has to do well in all five categories to win acclaim.

Singapore developments have performed well in the FIABCI competition over the past few years, ever since City Developments' Republic Plaza became the first project to bag the FIABCI Prix d'Excellence overall winner prize in 1997. Other top winners over the years include Suntec City, Prudential Tower, Caribbean at Keppel Bay, the Esplanade Theatres on the Bay, 1 Moulmein Rise and One Raffles Quay.

The win by Orchard Scotts is the fifth FIABCI award for Far East Organization. The company is the only developer in the world to have five FIABCI wins, it said. 'We're constantly challenging ourselves to deliver better homes and lifestyle experiences for our customers, who are increasingly well-travelled and cosmopolitan,' said Chia Boon Kuah, executive director and chief operating officer of property sales at Far East Organization.

Being conferred prestigious international awards such as the FIABCI Prix d'Excellence serves as an encouragement and is a testament to the company's track record in building top quality award-winning developments, with internationally recognised environment, health and safety standards in mind, said CityDev's managing director Kwek Leng Joo. 'Beyond enhancing our brand positioning, winning such awards helps us to internationally benchmark our business practices and serves as a motivation and challenge for the company to scale greater heights in the future,' he said.

Like the FIABCI Prix d'Excellence, the MIPIM Asia Awards - designed to pay tribute to the most innovative real estate projects in the Asia-Pacific region - also drew a lot of interest. During the last round of the awards in late 2008, projects from China, Japan, Singapore and South Korea won trophies.

Singapore's Changi Airport Terminal 3, designed by CPG Consultants Singapore and developed by the Civil Aviation Authority Of Singapore, won in the Mixed-use Buildings category. Other awards included one for City Developments' The Sail @ Marina Bay in the residential developments category.

Donald Han, managing director of Cushman & Wakefield in Singapore, says that investors tend to be willing to pay a premium for high-end and luxury iconic projects, such as The Sail @ Marina Bay. 'There is a sense that the global market already knows of (such projects),' said Mr Han. 'Developers build such projects at a premium (cost) and they pass on some of this premium to buyers.' And buyers, he added, are willing to pay the extra amount as the project is likely to gain in value and could be resold again for a profit.

Another accolade developers are increasingly keen to pick up - although it is not technically an award - is the Building and Construction Authority's (BCA) Green Mark certification. The scheme, which was launched in 2005, attracted more interest this year.

Developers whose projects received Green Mark certification said that the award was an indication of their company's quality. 'These (BCA) awards not only serve as recognition of our commitment to embrace eco-friendly initiatives, they also serve to distinguish Mapletree as a developer of high quality sustainable developments, offering not only the highest standard in functional efficiency but also conducive environments that our tenants' staff will be proud to work in,' said Tan Boon Leong, Mapletree chief operating officer and CEO for Singapore investments.

'We believe that the creation of green buildings make good business sense as they are investments that will translate to user benefits and cost savings, not just for us as landlord, but also for our tenants.'

Mapletree received BCA awards for all the four projects that it submitted for evaluation this year - including the highest Platinum certification for upcoming projects Mapletree Anson and Mapletree Business City. City Developments also received several BCA Green Mark awards this year, including a Platinum one for its residential project Quayside Isle Collection at Sentosa Cove. The BCA Green Mark Platinum is awarded to exemplary green projects that effectively demonstrate 30 per cent energy and water savings, as well as environmentally sustainable building practices and innovative green features.

Interest in building 'green' developments is growing as tenants are also showing an increased willingness to pay more for green space. A survey conducted by CoreNet Global and Jones Lang LaSalle late last year showed that 60 per cent of Asia-Pacific companies are willing to pay a premium rent to occupy sustainable space - despite the tighter economic environment. 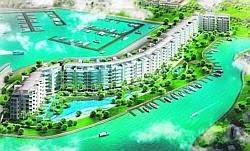 'The bottom line is still about rental, any green features or great design has to translate to competitive rents,' said Cushman & Wakefield's Mr Han. However, if all things are the same, tenants - especially US companies with a stated goal of going green - will choose green buildings, he said. The increased emphasis being placed on international awards and greening is also changing Singapore's landscape, market observers point out. More developers here now hire internationally renowned architects to design their projects, and also allot more space within a development to greenery.

CapitaLand's 1,040-unit The Interlace (on the site of the former Gillman Heights) was designed by Ole Scheeren, a partner at the Office for Metropolitan Architecture - the firm behind the design of the distinct 54-storey China Central Television Station headquarters in Beijing. The Interlace will also have extensive greenery.

CapitaLand said that using the Office for Metropolitan Architecture cost a few times more than just going with a 'normal' architect, but the developer is convinced that the end results will be worth it.