COME October, it will be 10 years since en bloc sales became a practical reality with the law that allowed an 80 per cent majority to decide the sale of a development, (90 per cent for those less than 10 years old). Before this, there had to be unanimous consent by owners for the sale of a development. To mitigate the effects of 'majority rule', safeguards were put in place to protect the rights of the non-consenting minority owners. The key tenet was that any deal must be entered in good faith. 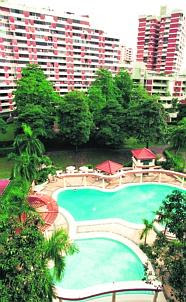 The new regulations were welcomed by many sellers, in particular those who felt held to ransom by a single dissenter in previous attempts, or who saw the entire exercise scuttled because one owner in the estate was uncontactable.

Since the change in the law, over 270 en bloc developments have been successfully sold. The average value of the deals was close to $100 million per development. This compares starkly to the average of $50 million for the 140 deals that took place from 1994 to 1999, before the law came into effect. While the increase in property prices did contribute to the increase, the ability to maximise development potential and extract value was the major factor. The projects sold under the old 100 per cent rule were typically no larger than 50-80 units.

Without the 80 per cent rule in place, embarking on the exercise for large developments with over 100 units was simply unthinkable. Just the thought of one owner being able to scuttle the deal was enough to deter the owners from slogging through the process.

Apartments, as the mainstay of private housing, began to be popular in the 1960s, shortly after Singapore's independence. They were typically low rise, with the total number of flats in a development below 100 units. The 1970s saw the introduction of larger scale high-rise condominium housing, with pioneering developments such as Pandan Valley (over 600 units) and Ridgewood (over 400 units). It was also during this period that the Housing and Urban Development Corporation (HUDC), a unit of the government, started building affordable flats on a large scale for the then 'sandwiched' group of middle-income families. Among them were Farrer Court, Pine Grove, Gillman Heights and Laguna Park.

These projects are now close to 40 years old. Soon, they will start looking old and tired. In many countries, old and dilapidated buildings become breeding grounds for crime and vice. While this is not likely in Singapore, the real danger is that these developments may become enclaves of older Singaporeans. This is clearly not the way to go for a dynamic and vibrant Singapore.

In Europe, buildings built centuries ago still remain habitable, besides being rich in character, history and beauty. The city centres of London, Paris and Prague have buildings that are hundreds of years old. Sadly, this is not the case in Singapore. In the immediate post-independence period, the real estate and construction industry was not inspired to build legacies of lasting beauty, but instead put up affordable, practical homes. As such, not many buildings of the 1960-70s are serious contenders for preservation on architectural grounds; and they have little if no historical significance. It is mainly the colonial era buildings that the planners feel should be conserved.

If Singapore did not have the law that allowed for the majority of the owners to push through an en bloc sale, probably the only other way to rejuvenate these ageing developments would be for the government to acquire them compulsorily. However, the owners would at best be paid market value of the individual apartments, without any benefit of the redevelopment potential factored in. It would also bring the government into a sector where there is no immediate public interest at stake.

The 80 per cent en bloc law made it possible for the private sector to take the lead in maximising the value of scarce land, rejuvenating old developments and allowing owners, rather than the government or developers, to benefit from increasing property prices.

It must be conceded that the manner in which the 80 per cent legislation was drafted in 1999 was not highly elaborate nor perfect. But it was principle-driven and worked well for a good eight years. It got the job done in facilitating urban renewal. Maryland Point at Amber Road is now The Esta, a spanking new condominium. Eastern Mansion, which was probably one of the oldest apartment developments, is now Aalto, an almost completed luxurious condominium with unobstructed sea views. There are many more examples of how the urban environment was quietly transformed within years.

However, in 2007, the complexion of the en bloc sale process changed as the market heated up. There were mounting complaints that some majority owners were not entirely fair or transparent in their conduct. Minority sellers cried out for greater protection. Owners and developers got embroiled in litigation. Non-consenting owners challenged consenting owners in court. Developers threatened to sue owners who were attempting to back out of deals. The irony is that it was often the consenting owners who were fighting to back out of the very deal that they inked and were earlier championing.

Fights grew more intense with cases going all the way to the Court of Appeal. About 10 cases went to the courts, with half of them making headlines for the bitter feuding. All of a sudden, en bloc sales became synonymous with trouble, disharmony and disorder. The principle behind the 80 per cent rule began to be questioned.

The cases that went to court did not reflect the reality of the matter. During the property bull run in 2006 and 2007, as many as 162 en bloc projects were sold successfully; but it was largely the five to 10 troubled cases that dominated the headlines. This created the perception that the en bloc laws were flawed. Many watchers also attribute the intensity of the litigation to the large sums at stake in the contested cases, which were mainly developments which were sold when the market was rapidly rising.

The laws that had worked well for eight years suddenly seemed to need fixing. In October 2007, the government reacted by tightening the laws to raise the bar on transparency and accountability on the part of the majority owners handling the sale process, and further safeguards were put in place. While most of the changes were positive in that they ensured a greater level of disclosure, many felt that some provisions went a bit too far. The changes were in reaction to owners who protested about lack of transparency and accountability, complaints that, to a certain extent, masked the root cause of the contested cases - the lost profits and dissatisfaction when the market surged after the sale was struck.

As a result, owners who would have otherwise happily volunteered to serve in the collective sale committee, today fight shy of getting involved. The fear of being sued by minorities or purchasers and exposure to liability keeps them on the sidelines.

We believe the law makers should look towards moderating some of the new provisions. There is no way that any rule can please everyone. Democracy goes by majority rule. For minority owners who genuinely do not wish to be forced to sell their homes, perhaps the authorities could consider raising the threshold age of a development for which the 80 per cent rule would apply, from the current 10 years to 15 years.

There are bound to be other approaches to renewal and maximisation of land use, but making en bloc sales difficult will take us back to the situation 10 years ago. Until a new solution is found, we need to ensure that en-bloc sales remain workable.