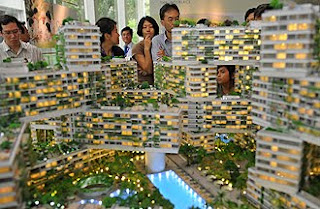 DEMAND for private homes remained strong over the weekend despite measures announced by the Government last week to take the froth off the market.

Property developers CapitaLand and Hotel Properties said yesterday that 233 units - or 65 per cent - of 360 units launched at The Interlace project, at the former Gillman Heights site in Alexandra Road, were sold in the past week.

Guocoland, which held a preview launch of its freehold 119-unit Elliot At The East Coast project over the weekend, sold 45 - or 75 per cent - of 60 units launched at an average price of $970 psf.

At the upper-mid segment of the market, buyers snapped up another 5 per cent, or 14 units, at Singapore Land's 289-unit Trizon At Mount Sinai over the weekend.

The long weekend's sales seem to indicate that buying interest has not been dampened by the Government's moves to cool the market, which include scrapping the interest absorption scheme (IAS) and restarting confirmed list land sales in the first half of next year. The IAS allowed buyers to put a down payment and defer the bulk of the purchase payment until the project was completed.

Guocoland's spokesman told The Straits Times that fewer than 10 per cent of its buyers, four out of 45, took up the IAS, which adds another 2 per cent premium to the sale price. Elliot at the East Coast was approved for the IAS before the Government banned the scheme.

'Feedback from buyers indicates that they are not overly concerned with the Government's cooling-down measures, and are confident of the long-term capital appreciation potential for well-designed properties in ideal locations,' said the spokesman.

At The Interlace, however, CapitaLand decided not to offer the IAS despite having approval for the scheme.

Still, even without the scheme, 'home buyers have shown such strong support for The Interlace', said CapitaLand Residential chief executive Patricia Chia. The project's design by the Office for Metropolitan Architecture was a compelling draw for many buyers, she added.

The 1,040-unit project, which offers 807 to 5,877 sq ft units, saw a steady stream of visitors at its temporary River Valley Road sales office over the weekend, said CapitaLand.

At Trizon, it was a similar scenario with sales momentum continuing over the weekend as the IAS was never offered for this project, said a Singapore Land spokesman. Prices for all three projects were as indicated by developers before the Government's move.

Industry observers note that buying interest could have been boosted by buyers who emerged after the Hungry Ghost Festival ended prior to the weekend.

The property market typically goes into a lull during this period as many Chinese consider it inauspicious to make housing commitments at this time.

Ngee Ann Polytechnic real estate lecturer Nicholas Mak said he was not surprised by the weekend's turnout, adding that buyers supporting the market now are owner occupiers or long-term investors. As a premium is added to the sale price for the IAS, it was not very popular to begin with, so the government move has not had such a big impact, he noted.

'Of course, pure speculators would have been weeded out now, so sales numbers for this month might be lower because of the measures,' he said.

Home buyer J. Soh, 35, who visited The Interlace sales office yesterday, said the recent measures have not affected his buying appetite. 'I'm looking for a home to live in, and was drawn to the project's creative design. If I find a unit I like, I'll buy it regardless of the new rules,' he said.

Another buyer, Ms Sarah Tan, a 39-year-old marketing executive, said she was interested in buying a private property, but that 'prices have shot up a bit too high in recent months'.

'I fully support the Government's cooling-off measures. I hope that they deter speculators from pushing up prices so people like me can still afford a home,' she said.