A place to work, live, play and learn

HUSHED laboratories, complex equipment and stern researchers in white coats - these are the stark images that most people associate with scientific research centres. But step inside Fusionopolis, and it becomes clear that the place is nothing like a large, cold test bed. Singapore's major research hub for the science, engineering, infocommunication and media industries is decked with sky gardens, restaurants, a fitness centre and even a theatre. 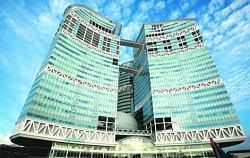 With recreational facilities that would rival a small mall's, Fusionopolis is not just a place for working hard, but for playing hard too. And its doors are open to both researchers and the public.

Fusionopolis 'will provide an exceptional environment for the integration of working, living, playing and learning', says JTC Corporation in its FY2008 annual report

There is hardly a reason for anyone at Fusionopolis to go hungry when there are plenty of food and beverage outlets around.

For the daily dose of caffeine, there is Starbucks Coffee, Black Canyon Coffee or Ya Kun Toastwich (this Ya Kun outlet is said to be one of only two in Singapore which sells sandwiches).

There is also a wide variety of establishments catering to the Asian palette, from Koryo (Korean) Restaurant, Shin Nichi Japanese Restaurant to Fai Gor Hong Kong Cafe. Western food is available from Eighteen Chefs Trattoria, and patrons can catch jam sessions on some Tuesdays.

Fusionopolis also has a food court and a Market Place supermarket. Shopping at this supermarket is far from mundane. There are Futurecarts - trolleys fitted with computers, radio tag readers and video screens which offer shoppers sales information, nutrition tips and recipes. The systems on the trolleys can even collect data on shoppers' likes and dislikes.

Those who need a tipple after work can head to Harry's to chill out, or to My Wine Shop to take home a bottle of wine.

The food and beverage outlets are spread across five levels, from basement one to two, and levels one to three. Other retailers such as GNC, Frames & Lenses and Standard Photo are nestled among them.

Interestingly, the Asian Food Channel has its headquarters in Fusionopolis. Its travelogues and cooking shows introduce Asia's top restaurants, chefs and cuisines to television viewers.

Exercise is said to sharpen minds, and Fitness First has aptly opened another club at Fusionopolis. It occupies the 23rd to 25th floors, allowing members to enjoy panoramic views of the Western part of Singapore as they work out. The club also has a 25-metre rooftop swimming pool.

Those who need a quick break from work can pop by the 13 sky gardens spread across different levels of Fusionopolis. The gardens are uniquely designed, and some have ponds and water wells. The six main gardens go by names such as The Springs and The Groves, and one is located on the 23rd floor.

The gardens add greenery to the working environment and are also environmentally-friendly. They act as 'green lungs' for Fusionopolis, helping to diffuse heat and cut down on energy usage.

Fusionopolis has brought elements of art and science together with its $20 million Genexis Theatre. The 560-seat oval-shaped theatre can house not just art events, but also science exhibitions and conferences for engineers and specialists working there.

'Now you can have a science festival here and an arts festival here,' said JTC assistant CEO Philip Su in an earlier report. The theatre is the first to be built by JTC.

The experimental theatre comes with adjustable seats which can be moved to create space for performers. Some 400,000 timber beads line the walls to provide acoustic insulation. There is also a cargo lift near the stage so that props can be easily loaded before a performance. Feedback from surveys indicate that the theatre would add value to the local performing arts scene.

The first phase of Fusionopolis was officially opened in October last year. Spanning 120,000 sq m, it is the first integrated mixed-use development in the one-north area.

Free shuttle rides to the research centre are available from the Buona Vista MRT station, and those who drive can enjoy free parking for the first two hours on weekends and public holidays. Fusionopolis will be linked to the one-north MRT station on the upcoming Circle Line soon.

The 103,600 sq m Phase 2A of Fusionopolis will be completed in 2013 and will feature Singapore's largest R&D clean room facility. There will also be dry and wet laboratories and vibration-sensitive test beds.

Phase 2B is expected to be ready next year. The 50,000 sq m development will house various agencies collaborating with institutions located in Phases 1 and 2A of Fusionopolis.