THE office market here, like many around the world, has seen a fundamental shift in dynamics over the last nine months, with a marked drop in demand since the collapse of Lehman Brothers a year ago leading to a drop in rents. While all markets are cyclical, Singapore's commercial property market has seen rental fluctuations that are typical of a more volatile market such as Hong Kong.

The reason for this is that many new developments were cancelled or delayed during the Asian financial crisis/Sars period in 2002-2004. The typical four-year construction period for a Grade A office building means that there is a lag in the supply pipeline, which was adversely affected from 2006-2008. 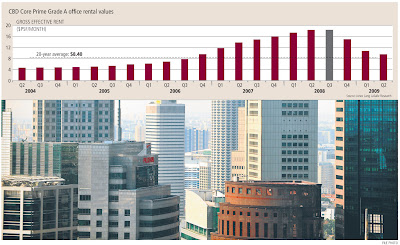 Jones Lang LaSalle's research shows that from the bottoming out of the market in 2004 to the peak in Q3 2008, Grade A core CBD vacancy shrank from 11.6 per cent to 1.8 per cent and rents surged by 303 per cent. Post credit crisis, the negative take-up and concerns of over-supply have led to rents dropping by 48 per cent between Q3 2008 and Q2 2009.

Market sentiment tailed off rapidly between Q4 2008 and Q1 this year as occupiers began to give up space at the same time that some of the new developments were completed. The result is that the vacancy rate in prime Grade A buildings rose from 1.8 per cent in Q3 2008 to 6.1 per cent in Q2 this year.

A number of occupiers tried to mitigate part of their outgoings by either subletting or finding replacement tenants for their space. By June, 'shadow space' - currently leased space that occupiers are looking to dispose of, including space not available until 2010 - stood at 800,000 sq ft. If shadow space is included, the vacancy rises by about 30 basis points.

Part of the decline in sentiment has been caused by concern over future supply. Singapore has a larger than normal supply pipeline, especially in the core CBD. That said, there is an argument that in order to attract inward investment, Singapore has to constantly upgrade its office space offering and the new buildings coming to the market are, in the main, well specified and offer a significant upgrade to occupiers.

In the short term, net take-up is expected to remain low as there has not been any uplift in new office demand despite a less pessimistic economic outlook. Interestingly, the first two months of Q3 have seen significantly higher activity in the office market. There are two main reasons behind this increased activity.

Firstly, activity that is lease expiry driven. Given that the first wave of the long awaited new supply has now started to hit the market, there is some vacancy in the market and tenants now have real options. On the back of this we are seeing a discernible flight to quality in favour of the new developments ready this year.

The biggest roadblock to relocating today is a lack of budget for capital expenditure (capex). On the back of this, a number of active inquiries are focused on fully fitted 'shadow space' that negates the need for capex spend for fit-out.

Secondly, there are quite a number of large occupiers (50,000 sq ft plus) in the market who have been sitting on the sidelines for the last nine months for various reasons. They might not have been able to accurately predict their future headcount, lacked a capex budget, or else anticipated a weaker market ahead.

These occupiers are now coming to market as it has fallen significantly. Also, occupiers of this size would need to plan a move 12-18 months in advance, and this is close to the completion periods of new supply.

A significant number of these occupiers, especially those in the financial services industry, are also looking for enhanced specifications such as trading floors, enhanced power and air-conditioning provision and space for their dedicated equipment - back-up generators and air-conditioning, etc. The ability to supply such needs is limited and hence the first movers into a building have more chance of securing the specifications they need.

The increased activity is also being generated by the desire among some occupiers to secure branding rights (naming or signage rights) to the building they plan to occupy. The availability of this in the market is even more limited and hence occupiers will commit early in order to secure them.

Given the drop in rents and uplift in market sentiment on the back of both the global stock markets and local residential market, in the short term we expect to see the office market continue to be active. However, given the supply scenario, we expect rents to still face some downward pressure, albeit at a more muted pace, and much of the activity to be from consolidation or a flight to quality as occupiers upgrade.

The writer is regional director and head of markets, Jones Lang LaSalle