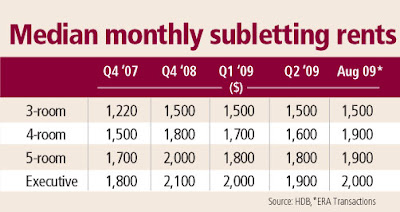 The market hit its peak in Q2 2008 with an all-time high of over 4,100 rental transactions. However, with the slowdown in the economy and overall employment, rental transactions slowed to an average of 3,700 units a quarter for the next one year (Q3 2008 to Q2 2009).

However, as the two integrated resorts step up their hiring of foreign staff, we could see the rental demand for HDB flats increase in the months ahead.

We may see quarterly demand nearing 4,000 units per quarter next year and this would probably push rentals up again, possibly by another 5-10 per cent.