Jurong Isle to get new facilities

JURONG Island, the centrepiece of Singapore's petrochemical industry, is getting a major infrastructure upgrade.

A new barge terminal and a second road to the mainland to ease traffic congestion and improve logistics will be built by industrial landlord JTC. 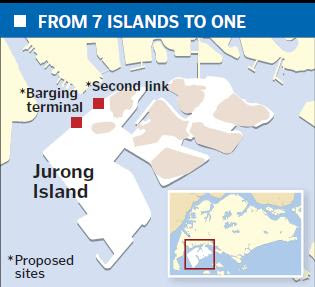 These new projects are in addition to the ongoing construction of the billion-dollar underground Jurong Rock Cavern for storing petrochemicals and oils.

The additional infrastructure work was announced by JTC chairman Cedric Foo yesterday at a ceremony to mark the completion of Jurong Island's 14-year land reclamation project.

The huge undertaking was finished ahead of its original intended target of 2030 to meet a surge in demand for development space.

Mr Foo told the media later that some companies had indicated that they would resume Jurong Island projects postponed because of the financial crisis now that the economy was looking up.

He declined to specify which companies.

Jurong Aromatics Corporation (JAC) and synthetic rubber producer Lanxess pushed back Jurong Island projects earlier in the year because of the downturn.

JAC is so far the only known company reported to have indicated that it would use the Jurong Rock Cavern facility for storage.

Mr Foo said JTC will also be implementing a biometric access system at its checkpoint to enhance security. This facility is expected to be completed in 2011.

The first phase of the barging terminal is slated to start operating in 2011, while the second road link is still under study.

Mr Foo said that JTC may also place more ship berthing facilities, such as jetties, on the island.

Jurong Island is home to 94 global petrochemical companies such as ExxonMobil and Japan's Mitsui Chemicals that have invested over $31 billion. These companies make up 80 per cent of Singapore's energy and chemicals industry.

The petrochemicals industry is an important segment of the economy and contributed 5.3 per cent of the value added to gross domestic product last year.

The island itself is formed from seven separate islands off the south coast. The 991ha of original land has been expanded to 3,000ha over 15 years.

'The story of Jurong Island is the result of innovation, determination, hard work and perseverance,' said Trade and Industry Minister Lim Hng Kiang at the ceremony.

He recounted how Singapore had not allowed the disruption to the import of sea sand to delay the reclamation plans, instead using alternative sources of sand supply and exploring other ways to meet the need.

Mr Lim said: 'We will continue to find ways to adjust the Jurong Island profile to bring about stronger integration for greater operating efficiencies by the companies, in particular to accommodate new entrants.'