YET another mall will go up on Orchard Road next year, but it will distinguish itself by giving only 30 per cent of its space to retail, or food and beverage businesses.

The rest of the space in the five- storey building will go to a wide range of facilities aimed at nurturing youth talent and developing a vibrant community for young people. 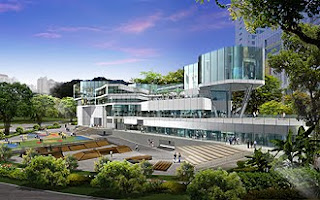 *Scape, which will sit on a 12,000 sq m plot next to Orchard Cineleisure, will be ready in March. It will be in addition to the *Scape Youth Park across the road.

The $40 million building will position itself as an iconic youth brand and be a youth-engagement hub, said its general manager Evelyn Lau.

Its third storey, for instance, will have dance, music and recording studios for budding musicians, and its fourth, new media production suites and editing studios for those keen on generating new media content.

Those who want to put up a drama or musical performance can do so at a theatre, which can seat 600.

A gallery on the fifth level will give space to young artists, photographers or sculptors to showcase their work.

In addition, a flea market-style space on the first level will give young entrepreneurs a chance to test the market with their products.

An outdoor area which can take about 5,000 people will be the venue for sports events such as the three-on-three basketball games in the inaugural Youth Olympic Games next year. The area will also welcome skateboarders, free-style runners and other sports enthusiasts.

The rental cost for these facilities has not yet been confirmed.

Although the mall is targeting those aged between 15 and 35, no age limit has been imposed for the use of these facilities.

*Scape is now marketing the space set aside for retail to interested tenants, but will look for businesses with a social cause and which can engage youth.

Ms Lau said: 'We want to raise the social consciousness of young people and make them an active part of creating social changes both here and globally.'

*Scape is managed by *Scape Co Ltd, a non-profit organisation set up by the Ministry of Community Development, Youth and Sports in 2006 to engage youth in their talents and passion.

Retail consultant Lynda Wee added that such a centre would widen the choice on the Orchard belt, though its success would depend on whether it can evolve to meet the needs of young people.

By the year's end, the rejuvenated shopping strip would have already raised the curtains on three mall offerings - Orchard Central and ION Orchard, which are already open, and 313@Somerset, which will debut in November.

'It sounds fun, and there will be different things to do, other than just eating and shopping,' he said.