THE UK residential property sector has become a two-tier market.

Prime real estate in London and the stockbroker belt have outperformed the rest of the country by a wide margin in the past year. Wealthy foreign buyers taking advantage of a cheap pound, the stock market recovery and banker, broker and trader bonuses are behind the revival. Much lower mortgage rates have also helped over-stretched property owners, enabling them to hang on to their pricey properties. There were thus less forced sales than expected. The supply of properties declined and this has played a part in pushing up prices.

The result is that after the property bubble in 2006 to 2007 and the crash in 2008, prices of selected residential properties, especially prime London, jumped in the past year. 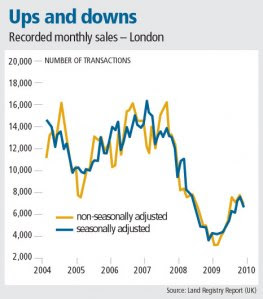 The chart from the Royal Institute of Chartered Surveyors describes what has happened in the UK. Despite the revival, however, average residential property values are still well below their peaks and so far this year, are declining in real, inflation-adjusted terms. In contrast there has been a smart recovery in London’s plush areas but even those prices, on average, are still below their 2007 bubble peaks.

Savills’ indices show that average values in the prime central London market increased by 4.6 per cent in the final quarter of 2009, raising annual growth to 8.9 per cent. In prime south-west London, values rose by as much as 17.8 per cent during the course of the year.

‘One of the key features of the prime London property market during the past decade was the demand for large-scale dwellings,’ says Yolande Barnes, a director of Savills. ‘The sheer scarcity of these much larger properties led to premiums being paid.’

This premium for large properties is the result of purchases from super-rich multinational buyers who have been seeking big townhouses in the most prestigious addresses, according to Savills.

In 2009, international buyers accounted for 45 per cent of all central London purchasers above £2 million, according to Knight Frank. Above £5 million, the proportion reached 60 per cent. The most significant individual nationalities buying real estate in London were Russians (14 per cent of all international buyers), Italians (11 per cent), US (9 per cent) and the French (7 per cent). Asians and Middle Eastern investors were active too.

The corresponding rise in demand for luxury accommodation paved the way for high-profile luxury flat developments such as The Bromptons in Chelsea, The Knightsbridge and One Hyde Park. Price premiums have not been confined to these rarefied markets as there were also above-average bids for large older London apartments.

These are averages of properties ranging from small apartments to semi-detached and detached houses. In practice, large houses in Chelsea and Kensington are currently trading from around £2 million to £5 million with prices of £1.5-3.5 million in areas surrounding Hampstead, St Johns Wood, Islington, Richmond and Wimbledon. Two-bedroom purpose-built apartments in these areas which dropped to between £350,000 and £600,000 have recovered by 5-10 per cent.

For international investors, property was a bargain when sterling was trading below 1.40 against the US dollar and was depressed against the euro. But since then sterling and property values have risen, so there are fewer bargains. The British government has also tightened tax regulations for foreigners resident in the country.

Tax rates jumped to 40 per cent for individuals earning just below £40,000 a year and will rise to 50 per cent for earnings above £150,000. Due to the more stringent tax regime, hedge funds, other asset managers and several corporations are moving out of the country. Medium to long term, this will be to the detriment of property prices.

Now that prices have revived to levels not far below bubble levels, the London market cannot be regarded as cheap for either local or foreign buyers. Since the market is distorted by a shortage of supply there tends to be a wide spread between bid and offer prices and there is a high stamp duty.

Growing numbers of people are seeking rental accommodation, but despite this demand, rents have only increased slightly. The standard of rentals varies greatly. Yields are at uneconomic levels for potential property investors who want to buy quality property in good locations.

Net yields, including maintenance, agents’ fees and voids, are below 3 per cent for prime properties and approach that level for lower quality real estate because of higher maintenance costs and unreliable tenants.

Supply is also beginning to rise. A growing number of home owners are placing their properties on the market following the price recovery, according to figures from the Royal Institute of Chartered Surveyors.

The number of people offering properties for sale in February rose at twice the rate as those wishing to buy. With uncertainty leading up to the UK elections, expected in early May, real estate prices are forecast to flatten out.