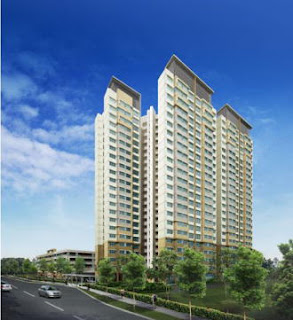 A staggering 5,015 bids were received for 828 new flats in Sengkang and Sembawang by the application deadline of midnight on Monday.

The high level of interest outstrips that of recent years, when about four applications were typically received for each new flat, according to housing analysts.

Demand was particularly intense for five-roomers in Sengkang, where 1,341 applied for the 126 flats on offer - more than 10 applications for each flat.

This high level of interest follows January's launch of four-roomers at Limbang Green at Choa Chu Kang, which attracted 14 applications for every flat.

The blistering demand for the developments at Fernvale Ridge in Sengkang and Sembawang RiverLodge is being attributed to the escalating prices of resale flats, which set a fresh record in the last quarter of last year.
HDB resale flat prices have risen by some 40 per cent over the past three years. 'Demand has shifted from the resale market directly to HDB's new flat queue, as many first-time buyers are likely to have been priced out of the resale flat market,' said Dennis Wee Properties director Chris Koh.

PropNex chief executive Mohamed Ismail was not surprised by the high level of demand given that new flats were priced about 30 per cent lower than resale flats.

'Couples who do not need flats so urgently will definitely join the queue,' he noted.

HDB launched the Sengkang and Sembawang projects under its build-to-order (BTO) scheme, which builds only when a certain demand is reached and has a typical waiting time of three years. Combined, the projects offer 266 three-room, 436 four-room and 126 five-room units.

At Sembawang RiverLodge, the 220 four-room flats pulled 1,234 applications, while the 86 three-roomers drew 278.

Another 126 two-room flats in Sembawang RiverLodge will not be offered for sale, but set aside for lower-income families at a later date, said HDB.

Mr Ismail said he expects the demand for new flats to remain high given that resale flat prices are likely to stay robust at least in the short-term.

But Mr Koh suggested that demand for BTO projects might be less than it seems if flat applicants do not take-up flats when they are finally offered to them.

'Some buyers who join the queue might be afraid to lose out, but are not that serious about buying,' he said.
HDB has offered 3,653 flats this quarter, with a further 1,200 BTO units to be launched in Punggol next month.