Even before the full rollout of the ambitious Next Generation National Broadband Network (Next Gen NBN), Singapore has moved up two places to the second spot in the global Networked Readiness Index (NRI) ranking published by the World Economic Forum (WEF).

The NRI is part of the 2009-2010 Global Information Technology Report, a widely watched study that has been jointly published by the WEF and global business school Insead for the past nine years. 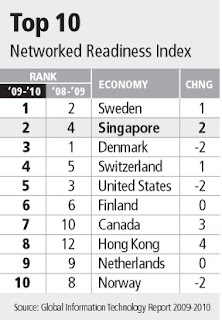 Sweden has emerged as the most networked country in the world in the current NRI rankings, overtaking Denmark which occupied the top spot last year. Sweden was a runner-up in the last three editions of the report.

This year, Denmark comes in at third place, behind Singapore. Denmark is followed by Switzerland in fourth place and the United States in fifth place.

The NRI examines how prepared countries are to use ICT (infocomm technologies) effectively in three dimensions: the general business, regulatory and infrastructure environment for ICT; the readiness of the three key stakeholder groups in a society – individuals, businesses and governments – to use and benefit from ICT; and the actual usage of the latest information and communication technologies available, according to Soumitra Dutta, who is Roland Berger Professor of Business and Technology at Insead and a co-editor of the report.

The current NRI covers 133 economies from both the developed and developing world, accounting for more than 98 per cent of the world’s gross domestic product (GDP).

Singapore’s stock has been rising for the past three years. In 2008, it came in a disappointing fifth, while last year it was up one slot to fourth.

Irene Mia, senior economist of the Global Competitiveness Network at the WEF, and the other co-editor of the report, noted that Sweden, Singapore and Denmark’s superior capacity to use ICT for economic growth stems from the focus on education, innovation and ICT access.

The report also shows the role that the government plays in Singapore’s high ranking.

In the Readiness component of the NRI, Singapore has the world’s top ranking, driven by No 1 rankings in areas such as government’s prioritisation of ICT, government’s procurement of advanced technology products, and importance of ICT to the government’s vision of the future.

The Republic also takes top spots in quality of education system, and quality of math and science education.

Singapore also tops in the Political and Regulatory Environment component.

Some of the areas where it doesn’t do as well are, for example, the infrastructure environment (where it is ranked 21st) and also in broadband Internet subscription (24th).

However, the broadband result is based on 2008 data and, according to other measures and rankings, broadband penetration in Singapore has improved over the past year and it is expected to improve even further when the Next Gen NBN becomes fully functional.

The two largest Asian emerging markets – China and India – continue their progression in the NRI rankings, leapfrogging another nine and 11 places to 37th and 43rd respectively, Prof Dutta said.

Europe remains one of the most networked regions of the world with 12 economies ranked among the top 20 performers in this year’s rankings.