WHETHER the property market is up or down, some areas are always popular, according to new analyses from property consultancy Savills Singapore.

Its list of perennial property hot spots includes one surprise locale far from the city centre. 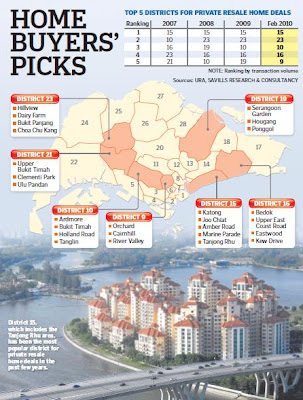 District 15, which includes the Katong, Joo Chiat, Amber Road, Marine Parade and Tanjong Rhu areas, consistently topped all 28 regions in terms of the number of non-landed resale homes sold from 2007 to February this year. Savills Research found 4,289 resale non-landed deals were done in the three-year period.

District 10, consisting of the Ardmore, Bukit Timah, Holland Road and Tanglin areas, was No. 2, with 3,622 transactions.

District 23 came in a surprise third, and registered the highest price growth of the top 10 hot spots, with prices rising 25.5 per cent. It takes in Hillview, Dairy Farm, Bukit Panjang and Choa Chu Kang, and had 2,837 sales.

If transactions in 2007 were excluded, District 23 would have surpassed District 10 in popularity. In other words, District 23 has become the second most popular hot spot for non-landed resale homes since 2008.

Ms Christine Sun, Savills’ senior manager for research and consultancy, said demand in District 23 could be due to attractive pricing, as the average unit price registered from 2007 to last year was still within the $500-$600 per sq ft range. Average prices reached $649 psf in the first two months of this year.

Given its proximity to the Bukit Timah belt and the nature reserves, this district has an edge over other areas in that price range, such as Tampines, Pasir Ris, Serangoon Gardens, Hougang and Punggol, Ms Sun added.

There are also a lot of developments in the area, such as The Warren, The Petals, The Madeira, Cashew Heights, Dairy Farm Estate, Regent Heights, Hillview Regency and Guilin View.

Ms Sun said the popularity of resale homes in District 15 may have been driven by the many launches in the area. Prices have risen in line with the launches, which draw attention to the area, she explained.

New launches since 2007 include Aalto, Parc Seabreeze, Silversea and The Seafront on Meyer. ‘People think the area is becoming hot and they start to see value in the area,’ she said.

Property experts said the area’s appeal lies in its sea views and proximity to well-known food places, the airport and the city. ‘It is an established residential area with ample amenities,’ said DTZ head of South-east Asia research Chua Chor Hoon.

‘There’s also a wide range of prices to suit different budgets, from the bigger, higher-priced condos in Tanjong Rhu to the small developments in Telok Kurau.’

Said Ms Sun: ‘In general, the next best areas to live in outside of Districts 9, 10 and 11 are in District 15, largely because of the sea view and the many good schools there such as Tao Nan School, CHIJ (Katong) Primary, Victoria Junior College and Chung Cheng High School.’

Ngee Ann Polytechnic real estate lecturer Nicholas Mak said: ‘District 15 has quite a big catchment of private homes so that may be why it has a high number of resale deals.

It came as no surprise that District 10, as a prime location, is popular with foreigners. Demand for homes in this area fell significantly in 2008 but has recovered somewhat since, she added.