The market is likely to chalk up more than $200 million worth of transactions this year, says GRACE NG

IT was a stellar year for auctions last year despite the unfavourable market conditions. About $168.4 million worth of properties were sold at auctions in 2009, doubling the $83.67 million done in 2008. 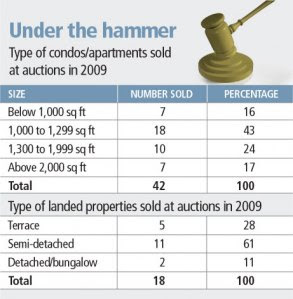 Strong interest was seen for shops and shophouses, as investors chose to park their money in higher yielding investments rather than keep it in the bank for paltry interest rates. The sector that saw the highest growth rate was industrial property. Sales value jumped 223 per cent, from $6.2 million in 2008 to $20 million last year.

Mirroring the buoyant sales in the primary residential market, residential properties at auctions saw a 250 per cent jump in sales value in 2009. The figure soared from $25.2 million in 2008 to $88.4 million last year.

More residential buyers are turning their attention to auction sales because the properties available at auctions are deemed to be better value for money as most of the older properties tend to have much larger land or built-up areas.

In addition, buyers who are owner-occupiers can move into the property when the sale is completed, which is typically three months after the payment of deposit. In comparison, purchasing from a developer could mean a wait of about two years before the property is ready for occupation.

# Landed properties: Terrace and semi-detached. In our land-scarce country, owning a landed property remains the aspiration of many Singaporeans. It is also a status symbol, as these properties are only available to Singaporeans and permanent residents with approval from the Land Dealings (Approval) Unit.

Even though landed properties do not come with facilities like those found in cluster housing or condominiums, they remain popular, as such properties usually have a private garden and car porch and do not have maintenance charges. Thus, it is not surprising that landed houses have become popular at auctions.

In 2009, terrace houses costing around $1 million and below were in demand because of their affordability. Five terraces were sold at prices ranging from $820,000 to $1.25 million.

Corner terraces and semi-detached houses, especially those that sit on large land areas, were the favourites, as these properties are rarely available. A total of 11 semi-detached houses were sold during the year at prices ranging from $1.05 million to $3.7 million. The majority of the transactions were below $2 million and the properties had land areas ranging from 2,400 sq ft to 4,414 sq ft.

The popularity of this type of property can be attributed to the fact that newer semi-detached houses have smaller land areas of about 2,150 sq ft, which could translate to a higher price per sq ft.

# Apartments with large floor areas: With developers building smaller apartments – some of them dubbed Mickey Mouse flats – in their new developments, the older and larger apartments have become a popular alternative at auctions with owner-occupiers as well as upgraders.

Given the limited number of large apartments in the primary market, many throng the auction halls in search of their ideal apartments. Apartments ranging from 1,000 sq ft to 1,299 sq ft were popular at auctions. Eighteen out of the 42 units sold last year fell within this category.

# Properties below $1million: Apartments and condominiums below $1 million were popular too, as evidenced by the 27 successful transactions seen in this category out of the 42 made available at auctions.

# Apartments in prime districts: The other property type that was sought after at auctions in 2009 was high-end apartments. Apartments located in the prime inner city and District 10 under mortgagee sales were in demand. Two apartments at The Clift were sold for $605,000 and $1.047 million. Another two apartments at Four Seasons Park were sold for about $4.8 million each.

In line with the recovery in the high-end sector, homes in districts 9, 10, 11, as well as prime inner city and Sentosa, will continue to be popular at auctions. We can expect to see an increase in sales of homes in these areas this year. The proportion of apartment sales is likely to rise to 35 per cent compared with 29 per cent achieved last year.

The opening of the two integrated resorts (IRs) will enhance Singapore’s reputation as a world-class city. Residential properties located near the two IRs were given a boost in value as a result, and were in demand as buyers aimed to cash in on the market.

Apartments such as The Sail and Marina Bay Suites, as well as properties in Sentosa Cove, will be sought after by investors and owner-occupiers alike.

Prices of high-end homes in the Core Central Region are still about 11 per cent below their Q1 2008 peak. Improving market sentiment in line with the recovery in the economy, ample liquidity and a low interest rate environment, as well as a hunger for alternative investment opportunities, are factors pointing to a recovery.

As such, we are likely to continue to see owners taking the auction route this year to sell their high-end properties in hopes of achieving the best price through competitive bidding.

We could also see some developers exploring auctions as a mode of sale for their properties if the high-end market picks up steam.

Some developers had success when they used an auction to sell their high-end properties. For instance, 12 parcels of bungalow land in Sentosa Cove were successfully auctioned off in 2006 for a total value of $86.34 million.

And in 2007, another developer successfully auctioned 12 luxury apartments at The Botanika for $52.92 million, which set new benchmark prices for the area.

The competitive bidding helped these developers achieve record prices for their developments, and they also gained international exposure as the auctions were beamed live via satellite to cities such as Hong Kong, Jakarta, London and Sydney to tap foreign buyers.

With an improved economy, the number of properties sold at auctions this year should rise to more than 140, from the 118 seen in 2009.

More activity is expected in the high-end residential sector and this is likely to boost the sales value at auctions. As such, the market is likely to chalk up more than $200 million worth of transactions this year.