THE leasing market for non-landed homes showed signs of recovery in the final quarter of 2009, going by Urban Redevelopment Authority numbers. Median rents saw their first quarter-on-quarter growth of 0.5 per cent following five quarters of continued decline from a peak in Q2 2008. The monthly median rent in Q4 2009 was $3.02 per sq ft. Occupancy rates also jumped, achieving 94.5 per cent in Q4 2009 – a level previously seen only in 2006/2007. 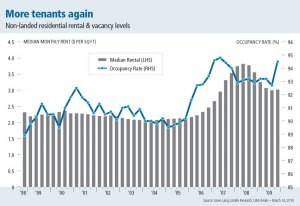 While these indicators may suggest a recovery in the leasing market, the strength and sustainability of this positive turn are yet to be ascertained.

Overall, leasing demand has been rising over the years as a result of a boost in the foreign workforce. Singapore’s strategy to open its employment market to more foreigners has benefited the leasing market as this transient group looks for short-term housing in the private residential market. The population of Singapore has grown from 4.03 million in 2000 to 4.99 million in 2009. The number of foreigners grew in tandem from 754,500 in 2000 to 1.25 million in 2009.

Although the number of foreigners employed has declined by 4,200 in 2009, there are still some 1.05 million of them working in Singapore. The job losses were mainly in the manufacturing sector. The construction and services industries, on the other hand, gained 19,700 and 10,400 new hires respectively.

Anecdotally, leasing demand remains driven by the financial industry. This sector is making a strong rebound from the financial tsunami, with total employment in Q4 2009 turning a positive 3,000. This trend is expected to continue, further supported by recent poll results from the Business Expectations for the Services Sector Q4 2009 survey by the Department of Statistics. The financial services sector has the most positive outlook in terms of employment and general business expectations.

In addition, based on the latest report on wages in Singapore by the Ministry of Manpower, the financial services sector recorded the second highest median gross wage in 2008 at $9,170 per month for managers aged 35 to 39.

The other emerging leasing demand driver is the biomedical industry. Under the government’s aggressive drive to develop Singapore into a biomedical hub, the country reportedly bagged some US$2 billion worth of investments over the past four years. They include plans to set up six new biologics manufacturing plants that are expected to create some 1,380 jobs. Despite the manufacturing sector reporting negative 4.1 per cent growth in 2009, biomedical manufacturing expanded by 11.5 per cent.

Looking ahead, new leasing demand is likely to come from either the financial or the biomedical industry.

The foreign employment market today is different from what it was a decade ago. Currently, instead of the traditional top management hire, foreign employment involves more middle management to executive levels with a limited housing budget. These expatriates are likely to be young executives working for a financial institution or researchers and laboratory executives. Despite the increase in foreign employees, the average housing budgets have remained relatively low. These new expatriates are likely to be given a housing allowance and are motivated by cost savings. They either downsize or seek discounted rents whenever the opportunity presents itself. As a result, smaller residential units close to their workplace or with good accessibility to public transport remain the main attraction.

While the prime districts of 9, 10 and 11 remain the traditional hot spots for leasing, the number of leasing deals there has been observed to be falling. At the same time, the Central Area (CBD/HarbourFront) comprising districts 1 to 5 has gained popularity as can be judged from the increase in leasing volume. A key factor is the revival of inner city living with tenants attracted by the proximity to the CBD, the arts and cultural activity, and other amenities within the area.

In addition, there are two emerging regions where we expect strong leasing demand in the future.

Based on the backroom operations of multinational financial institutions such as Credit Suisse, Citigroup and Standard Chartered Bank, residential projects in the vicinity of the Changi Business Park will be in demand. As such, we expect leasing demand growth in Simei, Upper East Coast and Tampines (Districts 16,17 and 18).

With the biomedical industry expected to expand in Biopolis, leasing demand in residential projects in the vicinity of this purpose-built biomedical estate (District 5) is also expected to increase.

The drivers and leasing profiles have changed dramatically over the decade. This has influenced developers’ product offerings and also recently caught the attention of investors who have been making a beeline to these areas.

Over the decade, developers have also been tweaking their product offerings to match changing demand. Overall, the market supply is shifting towards smaller apartments. Smaller units are easier to lease while maintaining a high per sq ft rental value. Similarly, smaller units are also more palatable in terms of absolute quantums paid. At the same time, developers are able to maintain their selling price on a per sq ft basis. Using a sample of major launches in the prime districts (9,10 and 11), an analysis of the composition by bedrooms was done. Studio apartments were excluded from the analysis.

After a challenging 2009, Singapore, along with the rest of Asia, is expected to experience a strong economic recovery this year. Financial markets are reported to have stabilised, while trade flows and industrial production have also picked up strongly. However, the recovery in Europe and the US remains weak. A pan-continental movement of talent from Europe and the US to Asia can be expected.

As Singapore continues to attract top talent here, leasing demand is also expected to grow. This is coupled with the improved economic outlook and the planned business expansions that are scheduled for the second half of this year. Island-wide rents are expected to grow in the region of 3-5 per cent by end-2010. However, rents will still remain affordable as they have generally come off during the recent economic downturn. Further rental upside is expected in the Central Area (Districts 1-4), Buona Vista (District 5) and Simei/Tampines and Upper East Coast (Districts 16,17 & 18).