PROPERTY investments still take pride of place in high-net-worth (HNW) individuals’ portfolios, accounting for a third of investments, a survey by Knight Frank and Citi Private Bank has found. 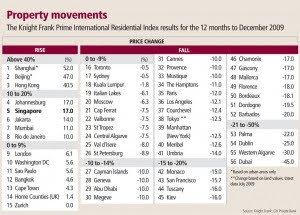 While survey respondents – who are Citi clients – are cautious, about 70 per cent believe this year will be a good year to invest in property, followed by 68 per cent in favour of equities. The least favoured asset class was bonds. The survey was conducted in January.

No details are available, however, on how many respondents took part.

‘When making property investment decisions, capital growth prospects are the main driver, followed by asset stability and then yields.’

He adds: ‘Although relatively few respondents were planning to purchase a new primary residence this year, a significant proportion do see buying opportunities in the current market . . . It’s clear that the wealthy still see property as a vital part of their investment portfolios and feel comfortable with it.’

Property has a weighting of roughly 33 per cent among the survey respondents, followed by equities’ share of 24 per cent. Some 35 per cent of respondents expect equities to be the best-performing asset class in 2010, followed by hedge funds and property.

Among the types of property exposures, residential property is expected to fare the best, followed by commercial property and agricultural property.

The big question is the capital appreciation potential of some of the real estate markets which rose significantly last year.

Based on Knight Frank’s Prime International Residential Index, Shanghai real estate registered the steepest upward trajectory with a 52 per cent rise last year. This was followed by Beijing’s 47 per cent and Hong Kong’s 40.5 per cent. Singapore ranked fifth in terms of the pace of price change, with a rise of 17 per cent, on par with Johannesburg.

Among other markets, the biggest plunge was in Dubai where prices fell 45 per cent. This was followed by Western Algarve in Portugal with 30 per cent.

‘I do believe that we will see this gap narrow again in 2010. It seems unlikely that property prices in cities such as Shanghai can continue to grow at these kinds of rates. In many (other) locations, there was positive growth in the latter half of 2009.’ New York real estate, for example, rose 2 per cent in the second half, but fell 12 per cent in the whole year.

Mr Bailey said fiscal intervention by administrations in Beijing and Washington means those cities are increasingly viewed as financial as well as administrative hubs – that is, having an impact on the cities’ prime property markets as banks gravitate towards them.

‘Although there are still questions over the state of the global economy,’ he said, ‘property remains a core part of the wealthy’s investment portfolios . . . Current price falls will be viewed by many as a buying opportunity, but as the data from our Prime International Residential Index shows, these windows of opportunity do not always remain open for long.’

On Singapore property, in particular, Knight Frank’s residential division head Peter Ow expects prime prices to climb another 10-20 per cent this year and outperform the overall market. Buying interest is expected from China, India and Indonesia.

‘The opening of the IRs (integrated resorts) will present more leasing opportunities for high-end residential properties and will help create new residential enclaves, strengthening the overall living experience of these new clusters,’ he said in the report.

Mr Bailey points out that low interest costs have protected potentially distressed owners and reduced the supply of property for sale. At the same time, low savings rates have spurred the wealthy to move out of cash and into property in search of yields. This has driven demand for property higher and against the backdrop of tight supply, has pushed values upwards in some locations.

‘Ironically, the unintended consequence of government economic stimulus packages has been to support demand and pricing in top-end residential markets – probably not something governments would readily admit to.’

The obvious question is whether current pricing is sustainable. ‘Our view is that most prime markets are suffering from an undersupply of stock and this will help maintain prices in the short term. Looking further ahead, however, it is those locations that offer a genuine lifestyle attraction to the world’s wealthy, rather than just an investment opportunity, that will prove most sustainable,’ he wrote.