Sales of new private homes double to nearly 4,000 in Q1

Overall prices rise 2-5%, with new highs in resale prices in some segments

The report, by CB Richard Ellis (CBRE), also said that overall private home prices rose by 2-5 per cent in Q1 2010. The price growth was supported mainly by resale transactions as developers maintained the prices of new launches in the same locations at last quarter’s levels. 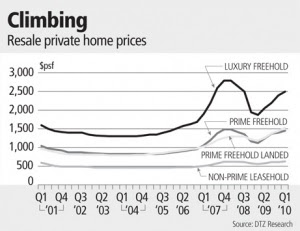 In fact, resale prices in some segments hit new highs in Q1. Research from DTZ shows that resale prices of freehold landed homes as well as leasehold apartments outside the prime districts (a proxy for mass market homes) saw new peaks in Q1 2010.

Buyers continued to be out in force despite compressed yields, government measures and the large number of new land sites released during the quarter by the government.

‘Many investors are buying in anticipation of future rises in rents and prices as the economy is improving and the long-term fundamentals of Singapore are strong,’ said DTZ’s executive director for residential Margaret Thean.

In the prime districts of 9, 10 and 11, the average resale price for freehold landed homes rose by 5.7 per cent to reach a new high of $1,529 per square foot (psf) in Q1 – a 28.2 per cent rebound from the bottom one year ago. Resale prices of landed properties have now climbed for three consecutive quarters.

The two segments still have room to gain as market interest has shifted from mass market to luxury and prime freehold homes.

‘Most of the new launches in the first quarter were freehold projects located in prime districts 9, 10 and 11,’ noted Joseph Tan, CBRE’s executive director for residential. These included Cube 8, Holland Residences, The Laurels and Waterscape. Sales were also strong for upmarket projects in the central business district. In Tanjong Pagar, the takeup at Altez and 76 Shenton Way was brisk because of their city locations and composition of small apartments.

Added Mr Tan: ‘Most of the new launches then were mass-market type projects such as Caspian, Double Bay Residences and Mi Casa. In the first quarter of 2010, most of the projects launched were more upmarket and are located in the prime districts of Sentosa Cove and in the Downtown Core.’

Foreigners bought around 23.5 per cent of the new homes in Q1 2010. The top three nationalities were Indonesians, Malaysians and PRC Chinese.

CBRE expects the take-up of new homes to fall to around 3,000 units in the second quarter of 2010. Home prices are expected to rise at a gradual pace, held in check by the government measures.

Chua Chor Hoon, head of DTZ’s South-east Asia research unit, likewise said that if the buying fever and price increase continue or intensify, more government measures are likely to be introduced. She expects private home prices to climb by 5-15 per cent in 2010.