Appealing to the mass market

LAST year saw the second highest volume of private residential transactions in history, with the 30,830 caveats lodged falling short only of the 37,304 recorded in the 2007 boom.

A combination of factors helped to boost demand for residential property. These were pent-up demand from those who had missed out on the previous boom, low interest rates and a lack of alternative investment options, after the debacle with financial products. These, coupled with the appearance of ‘green shoots’ in the economy and a rally in the stock market, helped the residential market stir to life in late Q1 2009.

The mass market was the star performer of the residential market. Of the 30,830 caveats lodged in 2009, 23,240 – or 75 per cent – were for transactions outside the prime districts of 9,10,11, the Central Business District and Sentosa/Harbourfront areas.

Quick-thinking developers rode the popular wave of affordable homes by altering their plans – downsizing units and releasing mass market projects to appeal to the buyers who were then dominating the market.

Buyers with HDB addresses accounted for 41 per cent of total buyers in 2009, almost double the 22 per cent in 2007 when higher-end projects were leading the rise in the market. Many in 2009 saw the opportunity to upgrade to private housing, which was also supported by rising HDB resale prices.

Over the past year, we have seen a 13 per cent rebound in the average price of secondary mass market units recovering back to the peak level in Q4 2007.

Through this period, the affordability index has also moved up 13 per cent to 136. The affordability index tracks the minimum gross household income required to qualify for an 80 per cent loan-to-value mortgage for the purchase of a private home. It takes into account property prices, CPF contribution rates, as well as interest rates. The lower the index, the more affordable it is as a lower income is required to qualify for a mortgage from the bank.

In other words, a higher income is now required to purchase a mass market unit compared to a similar one in Q1 2009. 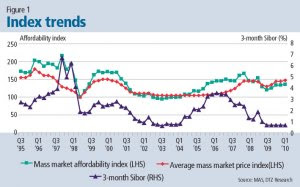 Nevertheless, mass market units are more affordable now than they were in 2007. This is largely due to the difference in the mortgage rates as the three-month Sibor rate has fallen close to two percentage points during the period (Figure 1).

Based on the affordability index, mass market units at end-2009 were more affordable compared to the period between Q1 2006 and Q3 2008. However, as interest rates are at an all-time low, it is a matter of time before they head north. A one-percentage-point increase in interest rates will result in a 14 per cent rise in the affordability index with no change in price. If prices were to increase by five percentage points at the same time, the index would rise by 19 per cent to 162 (Table 1).

There is no hard and fast rule as to the threshold index level at which buyers would find mass market purchases affordable as this also depends on income level.

However, there exists an inverse relationship between the affordability index and the number of home buyers with HDB addresses. During periods when the index declines, the proportion of buyers of HDB addresses increases.

Hence, mass market housing could become generally less affordable if: (i) prices were to increase by more than 10 per cent; (ii) prices rise by 5 per cent with a 0.5-percentage-point increase in interest rates, or (iii) interest rate rises by one percentage point with no change in prices.

Besides affordability, recent government measures affecting both the public and private segments would have some impact on the volume of transactions and are likely to check the increase in prices to less than 10 per cent this year.

At the moment, despite more new projects being launched at prices above $800 per sq ft, there are still a number of projects in the resale market available for less than $700,000 for unit sizes of above 1,000 sq ft. This shows that affordable units still exist and that purchasers are not restricted to micro-sized and high-priced residential units (Table 2). 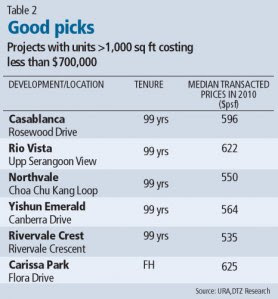 Greek historian Thucydides once said: ‘Few things are brought to a successful issue by impetuous desire, but most by calm and prudent forethought.’

For potential buyers, it would be prudent to look beyond the current interest rates to assess the ability to repay the monthly mortgage payments over the next 20-30 years when interest rates move up eventually.