ONE year into the global financial crisis that almost brought all major economies to their knees, Asia staged an impressive rebound at the end of 2009 with an ensemble of massive government stimulus packages.

Despite lingering doubts about the debt-laden European economies, Asia is expected to continue its strong recovery in 2010. The guarded optimism should continue to boost business confidence and revive corporate spending here. 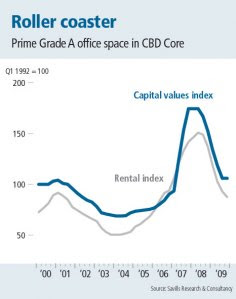 While the local residential and retail sectors were beneficiaries of the market exuberance, the office sector is still suffering the brunt of the financial meltdown. Office vacancy remains above equilibrium as supply outstrips demand. On the back of tenant relocations and corporate downsizing in the first half of 2009, it is estimated that 300,000 sq ft of shadow space has emerged in the Raffles Place and Marina Centre areas.

Between 2010 and 2013, the rental correction may slow down as leasing demand rises to mop up the new supply entering the market. With the gradual return of business confidence, more companies are expected to revisit their office space planning with a view to expansion.

Recent trends seem to affirm this proposition as the market saw a slowdown in the surrender of unused space and a withdrawal of shadow space.

Nevertheless, the 10-year average demand of 670,000 sq ft per annum is well below the new supply entering the market at an average rate of 2 million sq ft per annum.

Grade A rent fell by 35 per cent last year and is predicted to continue falling albeit at a slower rate of 20-25 per cent this year before a plausible bottoming out in 2011/2012.

On a more positive note, the prospect of distress may bring the potential for opportunities.

First, the delayed rental recovery supported by sound market fundamentals might bode well for the Republic in the short term. Singapore and Hong Kong are often the preferred Asian cities for incorporation or expansion of businesses among foreign investors.

In a recent Savills survey that compared the top five buildings in each market, Hong Kong ranked first in terms of prime office costs, followed by Tokyo, then Singapore and Seoul in third place.

Due to limited supply, Grade A rents in Hong Kong are expected to rise between 5 and 10 per cent this year. The spike in rents could be further exacerbated as Hong Kong is likely to face a severe shortage of office space once current vacancies are filled.

Little is also expected in the way of new supply in Hong Kong with a mere one million sq ft per annum is likely to be added between 2010 and 2013.

A rising cost base in Hong Kong with the consolidation of regional office markets could result in many multinational corporations relocating their businesses to lower cost centres such as Singapore. Singapore’s advantage lies in its financial stability, cultural affinity and strategic location.

Hence, Singapore may outpace other Asian Tigers to be a premier gateway city for MNCs to expand their influence here in South-east Asia. In recent years, over 7,000 MNCs have set up their operational bases here, with more being expected to expand further as office rentals decline to more affordable levels.

Secondly, a more sanguine outlook for the office investment market has emerged with the turnaround of capital values in the latter half of 2009. Average Grade A capital values held steady at $1,700 per square foot (psf) in the fourth quarter of 2009, ending five quarters of decline.

Outside the CBD, City Developments Ltd (CDL) sold the Office Chamber at Jalan Besar for $13.2 million or $940 psf in December 2009, and its majority stake in the 999-year leasehold North Bridge Commercial Complex near Bugis Junction for $46 million or $1,194 psf of strata floor area in November last year.

Due to more steady income derived from contractual rental streams, the office investment market could be an attractive alternative in the current market. As the office sector continues on its road to recovery, we could expect more investors to diversify into the office market.

Therefore, buying interest in the investment market is expected to gain momentum in 2010 and an increase of 5-10 per cent in Grade A capital values is likely for the full year. Buyers may also be looking to capitalise on possible long-term rental growth beyond 2010/2011.

Vacancies in the older Grade A and B buildings will continue to intensify. The situation could be exacerbated when tenants move out of existing buildings to new buildings like Marina Bay Financial Centre Towers 1 and 2 this year. This would continue to weigh down rents and may prompt landlords of older office buildings to upgrade or redevelop their investment properties to remain viable.