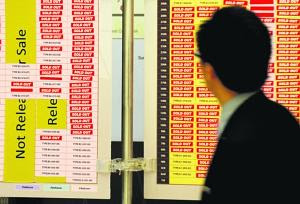 PRICES of private, leasehold resale homes have shot past their previous peak - in late 2007 - according to a new report by property consultancy DTZ.

The latest price rises for this segment, dominated by upgraders, while relatively modest, were enough to push average prices past the previous high. Landed resale homes saw the biggest price rises in the first quarter of the year to reach another new high while prime freehold prices edged nearer their previous peak.

Data from DTZ Research shows that prices of leasehold non-landed homes rose 2.1 per cent to $623 per sq ft (psf) in the first quarter, surpassing the $615 psf achieved in the fourth quarter of 2007.

DTZ said prices of these homes saw the least increase among the main property categories as they were already at high levels and there was more resistance to higher prices in the mass market.

Landed homes turned in another stellar showing in the first quarter, up 5.7 per cent to another new high of $1,529 psf.

This sector has now rebounded by 28.2 per cent from its bottom a year ago. It was already the star performer of the private home market last year, rising far more in price than other housing types, and lifting it safely above the 2008 peak.

The leasing market, DTZ said, was stable, with rental values remaining unchanged for the third straight quarter. The average rental value of prime non-landed homes was $3.32 psf a month, still 32.8 per cent below the high in the second quarter of 2008, it said.

The lower yields, however, had little impact on demand for new homes, as did recent government measures.
'Many investors are buying in anticipation of a future rise in rents and prices as the economy is improving and the long-term fundamentals of Singapore are strong,' said DTZ's executive director (residential), Ms Margaret Thean.

The firm's head of South-east Asia research, Ms Chua Chor Hoon, cautioned that more government cooling measures may be introduced if buying fever and price rises keep up - or intensify.

Said Colliers International director for research and advisory Tay Huey Ying: 'At the rate the market is moving right now, there is some cause for concern. But unless mass market prices continue to rise by more than 5 per cent a quarter, the Government may not step in.'

Ms Chua expects prices to rise more moderately - by 5 per cent to 15 per cent this year. 'The rise in landed home prices is expected to moderate this year, considering it has already risen quite a bit.'

CBRE puts the rise in first-quarter home prices at 2 per cent to 5 per cent over the fourth quarter of last year, supported mainly by resale transactions as developers have maintained prices of new launches in the same locations at last quarter's levels.

The high volume of new homes sold this quarter compared with last quarter shows the resilience of residential demand from both owner-occupiers and investors, CBRE said.

Some new projects that did well recently include West Coast's The Vision, which sold 230 units, and 76@Shenton, which sold all its 202 units.

Most new launches in the first quarter were prime freehold projects; private home owners made up two-thirds of the buyers, with HDB upgraders accounting for the rest, said CBRE's executive director, residential, Mr Joseph Tan. The opposite was true a year ago, when most new launches were mass market ones, he said.
Foreigners bought 23.5 per cent of the new homes in the first quarter, with the top three nationalities being Indonesian, Malaysian and Chinese.