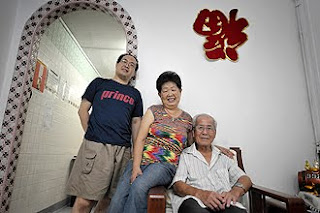 MORE married children now live in the same estate as their parents.

The count comprises married children, aged 21 to 54, who live in the same flat, the same block, a neighbouring block or a block in the same estate as their parents.

HDB said it saw the 6 percentage point rise over 10 years as an encouraging sign that its housing policies to get people to live near their parents were a step in the right direction.

Since getting married in 2001, store assistant Kok Chee Keong, 43, and his wife have been living one floor below his parents in Ang Mo Kio. It was a deliberate choice, borne out of his desire to take care of them.

'My parents are getting old,' he said of his 72-year-old father and 69-year-old mother, who had until last year helped baby-sit his children who are aged seven and eight.

The HDB survey did not ask respondents why they chose to live with or near their parents but noted that such couples usually have children aged 12 and below or no children.

HDB said the findings suggest that such families appreciate the benefits of living near their parents for the convenience of childcare or meal-sharing. 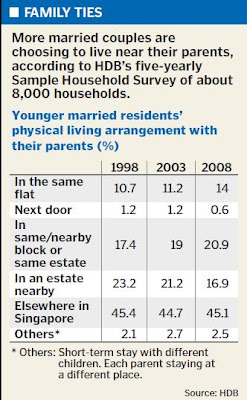 But Assistant Professor Chung Wai Keung, a sociologist at the Singapore Management University, was more cautious about drawing too many inferences from the 6 percentage point rise.

He said he did not think the increase was particularly significant over a decade, and that the trend could be a result of more opportunities for the younger generation to buy resale flats in mature estates.

Another trend revealed in the survey: The number of married residents living under the same roof as their parents also rose over the same time period, from 10.7 per cent to 14 per cent.

For some though, this was a temporary arrangement while they waited for their new flats to be completed.

Mr Edmund Ang Yew Huat, 30, and his wife have been living with his parents in Holland Close since they got married in January.

It will be five years before the young couple's flat in nearby Queenstown is ready.

Mr Ang, an executive in a non-profit organisation, said he and his wife could have had a shorter wait had they gone for a new flat in Punggol, but he ruled it out.

'My parents didn't want me to live so far away,' he said.

For some couples though, proximity to their parents' home was less important than the cost of their flat and how soon they could get it.

Teacher Simranpal Singh Sandhu, 29, and his wife would have liked to live near his parents in Yishun. But they found the cash-over-valuation of four-room resale flats there too high and opted for a new flat in Boon Keng instead.

The flat is not cheaper than the ones in Yishun, which cost over $300,000, but they do not need to pay cash upfront and can move into the flat in six months or so.