Market may not have rebounded to levels seen elsewhere but it posted a decent performance in 2009, reports PAULINE NG

IT may have been counter-intuitive, but 2009 proved to be a good year for Malaysian developers, the recession notwithstanding. The property market may not have rebounded to the levels experienced in other markets such as Singapore, Australia or Hong Kong, but it was generally decent.

Despite economic output contracting by 1.7 per cent, Jones Lang Wootton executive director Malathi Thevendran described last year as ‘exceptional’ for the property sector, which was buoyed by a RM67 billion (S$28 billion) stimulus package, cuts in lending rates, and attractive developer incentives such as the 5:95 home deal, where buyers foot just 5 per cent of the bill until completion. 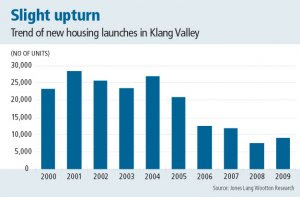 Generally, there were no major price reductions of residential properties, except for high-end condominiums in areas where mainly foreign interest had led to intense speculation and hence strong capital appreciation in 2008. This would be largely in the premium Kuala Lumpur City Centre area and Mont Kiara where existing stock is estimated at slightly below 4,500 and 9,000 units, respectively. Because of the robust supply pipeline and a limited expat base, recovery is expected to be slower.

Last month, the central bank moved to curb the swirling liquidity and possibility of inflated assets by lifting the key interest rate by 25 basis points to 2.25 per cent. It has hinted at more increases to come but plans to keep rates ’supportive of growth.’

Notwithstanding monetary tightening, property analysts do not foresee too much of an impact on launches or transactions given that developers are expected to continue to offer buyers the best deals.

CTW’s Mr Foo anticipates a greater range of new products this year, ‘likely not high-end, but mid to mid-high’ types of around RM250,000 to RM500,000 – mainly terrace houses outside the more established townships since those in the more popular suburbs of the Klang Valley cost upwards of RM800,000.

Ms Thevendran concurs. Houses in the RM400,000 to RM500,000 price range have seen ‘higher sales rates’ in recent months and ’schemes by reputable developers particularly to the west of Kuala Lumpur continue to experience strong demand’, she said.

With the lower end category over-done in the 1990s, builders are now focusing on the higher end as buyers have grown more discerning. She said the supply of houses over the past decade has expanded by 9 per cent per annum compared to 21 per cent for the high end and 11 per cent for lower end condo segments respectively.

Besides the Klang Valley – the centre for employment opportunities and hence inter-state migration – Penang and Johor Baru should also continue to see robust housing demand, especially projects with reputable developers and in close proximity to upgraded roads, new highways and public transport.

Because of the government’s aim to leverage Iskandar Malaysia as a growth area, infrastructure development is currently strongest in Johor Baru. New highways and links are being built especially in the south near the city and state administrative centre, Causeway and Second Link.

With better links and more commercial and leisure activities taking place, Iskandar promoters expect a ‘tipping point’ to be reached next year or the year after. The blueprints being rolled out appear to support this belief.

Take the two massive developments in the pipeline. The 300-acre South Key project on the former Majidi Army camp site in the city, envisages festive malls, alfresco dining, shops, corporate offices and the like in a fully integrated development that could be built over 12-15 years. Its estimated gross development value (GDV) is RM12 billion.

Lido Boulevard, although a third of South Key’s GDV, will not be minor. Undertaken by Central Malaysian Properties (CMP), the 123-acre project along the Johor Straits will stretch from the current abandoned Lot 1 shopping mall to the Harbour Master’s office.

Land reclamation will soon commence for the waterfront development which will include high-end condos, hotels, a mall, cultural centre, indoor snow park and a ‘garden city.’ CMP plans to launch the Lido Residences by the second half of the year. Its managing director Chan Tien Ghee said the 908-unit residences attracted a lot of foreign interest (Singaporeans and Indonesians in particular) at a soft launch.

The waterfront apartments would be fully furnished and sized from about 1,800 square feet. When asked about pricing, he told BT: ‘We are talking about a very high niche.’

CTW director Danny Yeo said the Johor property market has had a generally poor decade. But looking ahead, he said the ‘right projects’ – waterfront, secure, and those boasting developers with a good track record – will have minimal downside risks. He also recommends inter-city developments as they are ‘even cheaper than in a smaller town like Kuantan.’

‘If you are a Singaporean and have the intention to buy with a view to reside, it is a good time to do so now especially near the Nusajaya side,’ he opined. For investors, he suggests that commercial real estate is ‘a better bet.’ As in the case of the administrative city of Putrajaya, pricing for some of the residential developments could be ‘ahead of time’.

He believes now is the time for developers eyeing Iskandar to make a move as once the tipping point has been reached, land will cost more. ‘The question is do you believe in Iskandar?’

Going by Penang’s ever-rising property prices, many appear to believe in the island state. ‘Penang property has gone crazy because of the limitations (of being an island). Prices on the mainland have also improved but it’s industry driven,’ said Mr Foo.

A Penang think-tank attributed property increases in the state to the lack of land but also to speculation, robust investor demand from wealthy Malaysians and foreigners, and low cost of funds.

Over the period 1999 to 2008, Penang properties had increased a tenth more than the national average, according to Michael Lim, a senior fellow at the Socio-Economic and Environmental Research Institute. But with developers focusing mainly on the growing demand for higher-end products, signs of an under-supply of affordable housing were beginning to emerge, Mr Lim told a roundtable on the gap in affordable housing in George Town recently.

Penang could also be a victim of its own success with a growing number of residents upset over the burgeoning high-rise projects now dominating the landscape.

Henry Butcher Malaysia senior manager Fook Tone Huat has a suggestion: Look across the island to Seberang Prai – twice the island’s size and about 40 per cent cheaper. He expects the area to see a 10 per cent appreciation in price owing to its higher population density compared to the surrounding areas in the north.