WHEN private home prices made their sterling recovery in the second half of 2009, landed homes didn’t miss out on the action. The Urban Redevelopment Authority (URA) price indices for detached, semi-detached and terrace houses recovered by 22-26 per cent in 2H 2009, after falling some 18-21 per cent from the market peak in the second quarter of 2008 to Q2 2009. 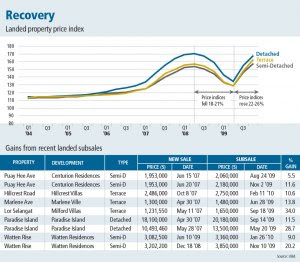 This upward trend is likely to continue because of the scarcity of landed homes in Singapore. Out of a total housing stock of 1.14 million units, only 69,500 or 6.1 per cent are landed homes.

While new landed projects are limited, home buyers are always willing to buy older properties in the resale market. On average, 380 new landed homes and 2,800 resale landed homes changed hands annually between 2004 and 2009.

Moreover, there is also a certain degree of speculative activity in the landed market. An analysis of the caveats lodged for subsales of new landed properties in the past year shows a gain of 5.5 to 34 per cent from their original prices two to three years ago.

Landed properties offer a certain prestige to homeowners in the middle to high-income groups. Nowadays, well-heeled homebuyers in their mid-30s are especially attracted to entry level bungalows with a land area of 4,000-5,000 sq ft and costing $4-$5 million. Some of these can be found in Lynwood Grove and Cotswold Close.

Equally popular are strata bungalows like Goodman Crest and Bellaville which have the same built-up area as the average bungalow but cost less – around $2.5-$3.5 million – because of the shared ownership of land and communal facilities like swimming pool and landscaped garden.

Similarly, cluster terrace houses are seen as value for money as opposed to condominiums because of their generous built-up areas of over 3,000 sq ft. These also come with communal facilities which appeal to families with young children.

However, the downside of cluster terrace developments is the rather crowded conditions within the compound and the higher volume of vehicular traffic they generate in the neighbourhood.

At the top of the Singapore housing pyramid are the good class bungalows (GCBs) which are the most prestigious and expensive type of housing. In just the first two months of 2010, some 14 GCBs were transacted, compared with just three in the first quarter of 2009.

The reason why leasehold landed homes in Sentosa Cove can fetch prices equivalent to, if not higher than, their freehold counterparts on the mainland is because of the resort island status, foreigners’ eligibility to buy and above all, limited supply of around 400 units. Foreigners are not allowed to buy landed properties on the mainland and even permanent residents need special approval from the authorities to buy one.

In 2009, a landed project in Seletar Hills estate called Luxus Hills was launched. The first phase of 78 terrace houses was sold within a few weeks. In the second phase, another 30 units sold quickly at a similar price range. The terrace houses fetched $1.7-$2 million while the semi-detached houses fetched $2-$2.2 million.

Estrivillas, a cluster housing project in Jalan Lim Tai See comprising 38 semi-detached and one detached house, was launched in November 2009. By January this year, 24 of the 39 units had been sold at $3.5-$3.8 million.

Developers marketing landed properties should emphasise the limited land resources and hence, the value of landed properties in the long-term. Secondly, owners do not have to pay maintenance fees for houses, unlike condominiums. Unless a house is very old, the upkeep is generally inexpensive. Spending money on one’s own property beats contributing $3,000 to $4,000 a year to a condo management or sinking fund.

Landed homes are also attractive as investments as they can fetch good rentals. Proximity to premier schools, international schools and embassies is definitely an advantage.

Limited supply results in the relatively inelastic prices of landed homes, and increasingly, those who hold such properties will find them a boon as more often than not these are assets that appreciate in value over time.