THIS is the year that high-end residential properties are expected to shine. Indeed, prices of luxury homes could recover by at least 10 per cent in 2010, bringing them close to the all-time high at end-2007. As Singapore’s economic recovery takes hold, the traditional prime districts of 9, 10 and 11 should re-emerge as residential hotspots. 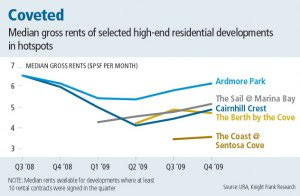 But new high-end enclaves are also likely to gain prominence. These hotspots will be found along the southern corridor, in places like Marina Bay, Tanjong Pagar/Shenton Way and Sentosa Cove/Keppel Bay.

The emerging luxury enclaves are the beneficiaries of several defining developments in Sentosa Cove and Marina Bay, which are coming to fruition this year.

Homes in Marina Bay will benefit from the opening of the Marina Bay Sands integrated resort, slated for end-April. But the prestige of this area also comes from the fact that Marina Bay is the newest prime office hub, where up-and-coming executives want to be seen at. Having a loft in this sophisticated new hotspot would certainly be something to flaunt.

Although there will be no major residential projects to be launched after Marina Bay Suites is entirely released, the buzz in Marina Bay is expected to translate into encouraging resale and leasing activity.

The excitement of city living extends beyond Marina Bay. The traditional CBD, such as Tanjong Pagar and Shenton Way, is increasingly popular with working professionals. Icon, One Shenton and The Clift are successful projects that were launched from 2003. The completed Icon condominium is enjoying monthly median rents of about $6 per sq ft. Meanwhile, Altez, a 60-storey development in Tanjong Pagar, was recently launched. Offering panoramic sea and city views, the project is priced from $2,100 psf to $2,300 psf.

UIC Building and 76 Shenton Way, both office buildings, will soon be converted into prime residential developments, enhancing the attractiveness of the area. 76 Shenton, a 39-storey condominium, is the newest launch in the area. These projects are testimony to the attractions of inner city living, where residents enjoy maximum convenience, whether at work or play.

The Economic Strategies Committee, in looking at maximising Singapore’s land use, has recommended turning Tanjong Pagar into a new waterfront district, by relocating the Tanjong Pagar port to Tuas once its lease is up in 2027.

Sentosa Cove is poised to become more exciting this year. Two new condominiums – The Oceanfront@Sentosa Cove and Turquoise – are scheduled for completion in 2010 while the Marina Collection will be ready in 2011. Meanwhile, Seascape and The Residences at W Singapore – both at Sentosa Cove – are being released this week. When these developments are built, Sentosa Cove will be a lively residential enclave with all the supporting amenities. These developments will transform Sentosa island into a self-sufficient waterfront haven.

The traditional prime residential districts are perennially attractive to home buyers and investors who prize a central location and all its conveniences, particularly the allure of shopping along Orchard Road. Generally, prices of high-end residential resale properties in the prime districts recovered by about 15 per cent in 2009, following a 27 per cent slide in 2008.

Prices this year could well hit the all-time high seen at end-2007, as experience shows that prime residential properties are the first to move in the early stages of an economic recovery.

For the first time in a long while, Orchard Road last year saw the opening of three new malls – Ion Orchard, Orchard Central and 313 @ Somerset. The new malls have refreshed the shopping experience in the premier shopping belt. This will benefit existing property owners as well as help sell new projects in the vicinity, such as The Vermont on Cairnhill and Hilltops.

Property investors should be able to find opportunities in all these residential hotspots, from the southern corridor to the traditional prime districts. However, the performance of the property sector will depend on the bigger picture – the economy and market sentiment.

As such, astute investors will need to analyse the prospects for the high-end residential market, before looking for their preferred property.

The government recently introduced measures to cool speculative activity, by lowering the loan-to-value ratio and introducing a seller’s stamp duty if a property is re-sold within a year. These measures, however, are likely to only impact speculators. Perhaps investors of high-end residential property can safely read that, following the latest government measures and pronouncements, there will be no further attempts for the time being to cool the residential market.

After all, the pace of recovery for the high-end segment this year will be modest compared with 2007 and can be seen as a recovery rather than price escalation. A realistic price recovery this year may offer investors who commit today a chance to enjoy gradual capital appreciation in 2011 and 2012.

Owners and developers of high-end residential properties can also expect to enjoy increasing buying interest from foreigners. Although Singapore is seeing more competition from regional cities where developers are improving luxury residential offerings, escalating prices in domestic markets in China and Hong Kong could make buyers there view our high-end properties favourably.

The full impact of the IRs on the property market will be felt this year, with the opening of Resorts World Sentosa and Marina Bay Sands strengthening the appeal of high-end residential properties in the southern corridor. The benefit of the IRs could extend to high-end property throughout Singapore, as the developments take the city up a rung in international exposure.

Visitors may be increasingly interested in Singapore for work and leisure, which would lead them to consider investment opportunities in high-end residential hotspots. This could lead to an increasingly international buyer profile in the luxury market.