From non-core to preferred asset 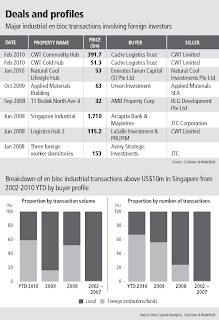 THERE has been a change in foreign investors’ perception of the industrial market over the last 10 years. Industrial properties have evolved from being a non-core investment product to a preferred asset class. This became more marked around 2008. Before that, en bloc industrial investment deals were dominated by local players, primarily Ascendas, A-Reit, Cambridge Industrial Trust and Mapletree Logistics Trust.

Post-2008, foreign and institutional investors started paying more attention to this sector once ruled by the local Reits. For instance, prior to 2008, foreign investors accounted for only one per cent of the total value and number of en block industrial transactions.

Higher yields derived from industrial properties were deemed as one pivotal reason. The lure of an improving economy is likely to see more foreign investors jumping on the bandwagon. This may lead to further yield compression in the medium term.

Let’s analyse the reasons behind the increasing appetite of foreign investors for this asset class.

Traditional asset classes such as residential, office, retail and hospitality properties yield between 3.5 per cent and 5.5 per cent annually. Average cost of funds for foreign investors range between 3.5 per cent and 4.5 per cent for a Sing dollar loan. Investors from the US and Europe need a higher hurdle rate to justify investing abroad. In their respective property markets, they can achieve yields of 6 per cent a year. For investors to venture abroad, they need a buffer of 100-150 basis points above their 6 per cent yield to justify undertaking the risk of a foreign investment risk. Industrial properties here can provide such high returns, and are deemed a safer bet.

The buyers’ landscape changed significantly in 2008, when JTC Corp offloaded $1.7 billion of its assets to Mapletree Industrial Reit and the Bahrain-based Arcapita Bank. It was the latter’s first foray into the Singapore property market.

Arcapita and its fund were on the lookout for Syariah- compliant investment opportunities in the region. Together with Mapletree, Arcapita bought into a majority 56.5 per cent stake. This comprised, among others, 39 blocks of flatted factories, six stack-up industrial buildings and three multi-tenanted business parks.

Under Syariah mandate, investors are not allowed to invest in properties where the tenants are involved in the sale or consumption of alcohol and cigarettes or are in the business of banking and finance, since Syariah laws prohibit the collection of interest. This leaves out market sectors such as prime offices (where tenants are mainly financial institutions), shops and hotels. Investments in industrial properties provide the perfect gateway. Another Middle Eastern investment group, Dubai-based Emirates Tarian Capital, recently purchased 29 Tai Seng Avenue for $53 million, with a leaseback to its vendor, Natural Cool, for 10 years. This would generate an annual yield in excess of 8 per cent.

Foreign (and local) investors are hungry for core office assets and there isn’t enough investment stock out there for sale. This inadvertently pushes up the sale price despite a softening rental environment, thus suppressing yields to the current sub-5 per cent level. It is estimated that there are no less than 20 foreign investors in Singapore looking for prime office investments (anything in the range of $20 million to $500 million) and they could not engage in serious negotiations over the past six months as sellers raised prices. The dearth of office investment deals has swung investors’ attention to industrial assets such as business parks and high-tech industrial buildings instead.

Industrial properties, particularly owner occupied ones, are sold on a leaseback basis, often presenting investors with attractive long secured leases. Sale and leaseback premises offer the security of tenures from five years to as long as the land lease itself (up to 30 years). Such long leases are seldom found in office assets, and even if they exist, are seldom offered for sale.

In 2007, when office rents hit the stratosphere, major office users such as DBS Bank, Standard Chartered Bank and Citibank started looking at minimising occupancy cost and decentralising backroom operations to suburban business parks. They would build to suit, lease back (almost) in entirety and monetise the assets by selling them to institutional investors, funds and Reits. Such assets remain one of the favourite investment options of foreign funds. These properties are usually leased back to reputable occupiers, providing financial warranties and a stable income base. These assets present defensive characteristics to investors, minimising risk of short term space vacancies and rental cycles.

Foreign fund managers are always looking for a growing niche sector to put their investors’ money in. A niche play has benefits. Firstly, it provides the necessary product differentiation that helps separate one fund from another. Secondly, if the right strategy is adopted, one can be a substantial player in a niche sector, enabling some control over market pricing.

Avery Strategic Investment did just that and invested in a niche asset class where there were hardly any competitors. They went in, took control of a niche market and raised standards. Their investment – workers’ dormitories – is classified under industrial use. The venture is controlled by US-based Morgan Stanley and Averic Capital Management, the asset managers with a stake of 97 per cent and 3 per cent respectively.

Investors with bigger appetites can embark on an Arcapita-style acquisition by buying stakes in a company. Investing via the company route allows the investor to gain control of a larger asset chunk instead of slowly accumulating properties on an organic basis. AMP Capital Investors, headquartered in Australia, recently made headlines by acquiring 16.1 per cent of MacarthurCook Industrial Reit, listed on the Singapore Exchange (SGX). The Reit was later renamed Aims AMPCI Reit and its portfolio consists of 25 industrial properties in Singapore and Japan, with an appraised value of $637.4 million (as at Sept 30, 2009).

ARA Asset Management, an affiliate of the Cheung Kong group, recently made its maiden foray into industrial property through a joint venture with listed CWT. The company, known as ARA-CWT Trust Management and 60 per cent owned by ARA, will invest mainly in logistics properties in Singapore and the Asia-Pacific.

This new regional logistics real estate investment trust – to be called Cache Logistics Trust when listed on SGX – will initially have a portfolio of six high-quality logistics properties, injected into the Reit by its operators and owners as part of a sale and leaseback arrangement, with an aggregate gross floor area of 3.86 million sq ft and a value of about $730 million.

As Singapore strengthens its position as a premier logistics and value-add centre in the Asia-Pacific, we can expect more investment dollars to be pumped into this sector. More high value-add manufacturing businesses will be lured to set up operation in Singapore to take advantage of its seamless infrastructure and various tax incentives. Last year, the Economic Development Board brought in some $11.8 billion worth fixed asset investments. This figure is likely to rise in 2010 with the recovering economy.

We expect more foreign investors to start taking notice of the industrial sector here. Local developers too are taking the cue from the active industrial investment market by re-igniting a slew of industrial development projects.

Since July last year, three industrial sites have been successfully triggered and sold to private developers. Two more sites, in Woodlands and Yishun, have just been triggered after receiving minimum bids. Developers are likely to remain confident in the medium to long term with an improving leasing market. They can then offload completed projects to investors such as Reits and funds, ploughing funds back to develop more industrial properties.

Right now, it’s clear skies ahead for the industrial investment market with the influx of foreign investors. What a remarkable transformation this sector has undergone over the decade.