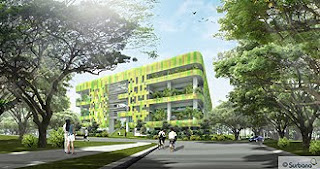 The $90 million building - called Cleantech One - will offer about 404,000 sq ft of office space that can house up to 50 green businesses when it is completed by December next year.

'If the solutions we implement are successful, we will replicate this throughout the rest of the Cleantech Park and share it with the rest of Singapore and the region,' said JTC's director of aerospace, marine and cleantech cluster, Ms Tang Wai Yee.

The masterplan for the Cleantech Park - which will be Singapore's first business park catering to green firms - was announced last month by JTC and the Economic Development Board (EDB).

When fully completed in 2030, the 50ha park will create 20,000 'green-collar' jobs. It will be built in three phases at an infrastructure cost of $52 million, which does not include buildings.

The park will also serve as Singapore's first large-scale integrated development, allowing firms to test-bed cleantech products and solutions - especially those catering to the tropics - before they are commercialised for the market.

Surbana senior vice-president (architecture) Frven Lim said yesterday that the building's main features include a green corridor to connect tenants to the green centre of the Cleantech Park.

'Cleantech One will also feature a 'living atrium' where tenants can interact in a lush, green landscape that is well- ventilated and makes use of natural lighting,' he said.

JTC is aiming for the building to achieve the highest accolade for environmental performance - the Green Mark Platinum award.

Construction of the six-storey building will begin in June.

The park is located next to the Nanyang Technological University (NTU), which will be Cleantech One's first tenant.

JTC said it is in discussions with other firms which may be interested in taking space at the building.