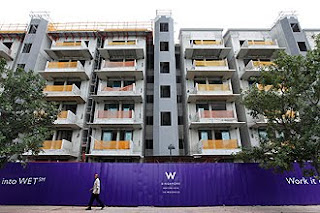 ABOUT a quarter of the 56 units released for The Residences at W Singapore Sentosa Cove were sold over the weekend for prices starting at $3.4 million.

This upscale condominium, which is part of the trendy 'W' boutique hotel brand, is being built by City Developments. Its spokesman said the price achieved during the exclusive by-invitation-only preview was in line with its launch price of between $2,500 per sq ft (psf) and $3,000 psf.

He said 40 per cent of the buyers were foreigners who were drawn by the project's 'unique lifestyle concept', particularly its strategic location in Sentosa Cove. It is located within the only integrated development in Sentosa Cove - the Quayside Isle, which will house trendy cafes, restaurants, speciality shops and entertainment spots.

It is expected to be completed before year end.

Buyers will have to pay at least $3.4 million for the smallest unit of the seven, six-storey blocks.
Also at Sentosa Cove, Ho Bee and IOI said they sold 25 out of 40 units released for the 151-unit Seascape condo over the weekend. The units were sold for an average of $2,700 psf. In terms of absolute price, they were transacted between $5.7 million and $12 million.

The eight-storey development is expected to be completed late this year or early next year. It comprises three- and four-bedroom units.