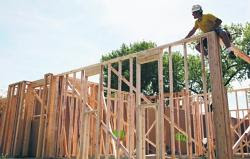 (WELLINGTON) New Zealand's home-building approvals fell for the first time in three months in June, signalling that lower mortgage rates are yet to kick-start sustained demand for property.

Second-quarter approvals rose 16 per cent from the first quarter and the trend in approvals is rising by about 2 per cent a month, the agency said.

Reserve Bank governor Alan Bollard cut the benchmark interest rate to a record-low 2.5 per cent in April and will probably leave the rate unchanged at his review today to help the economy recover from its worst recession in more than three decades.

Economists expect building approvals to keep pacing gains in house sales and prices and eventually lead the economy out of recession.

'We expect core consent issuance to start to improve with the lift in housing demand, as indicated by the rise in house sales,' said Jane Turner, economist at ASB Bank Ltd in Auckland.

'We expect consent issuance to pick up off its lows over the second half of 2009.'

Home sales rose 40 per cent in June from a year earlier, the Real Estate Institute reported earlier this month. Second-quarter house prices increased for the first time since late 2007, according to a government report published on July 6.

Excluding apartments, building permits rose 3 per cent in June and were down 27 per cent from a year earlier, yesterday's report showed.

Property construction has slumped amid the recession, which began in the first quarter last year, and as a credit crisis curbed development projects. Second-quarter approvals fell 39 per cent from a year ago, yesterday's report showed.

The value of home building and renovations approved in June plunged 18 per cent from a year earlier, the agency said. The value of non-residential approvals declined 7.4 per cent. -- Bloomberg