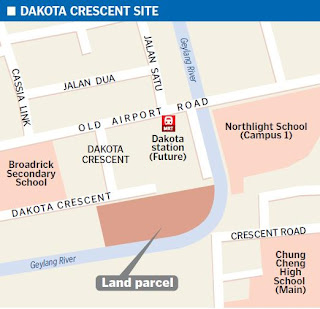 FOR the second time in less than a week, the Government has received an offer for one of its condominium sites - after a 10-month drought during the recession in which it was unable to sell any residential land.
Yesterday, the Urban Redevelopment Authority said it has received a minimum bid of $130 million for a 1.7ha site at Dakota Crescent, near the upcoming Dakota MRT Station on the Circle Line.
This comes just three days after an unnamed developer offered $62 million for a land parcel at Chestnut Avenue in Bukit Panjang on Monday.
Both sites are on the Government's reserve list, which means they are available for sale but are not put up for public tender until a developer pledges to put in a minimum bid.
The Chestnut Avenue site will be put up for tender today, while the Dakota Crescent site will be launched for tender in about two weeks.
The $130 million minimum bid that will be put in for the Dakota site works out to about $200 per sq ft (psf) of the potential gross floor area, which is about 650,000 sq ft, according to veteran property consultant Nicholas Mak.
He expects that when other bids come in during the tender, they could reach $350 to $370 psf of gross floor area, or $227.5 million to $240.5 million.
'The site is fairly attractive because of its proximity to the upcoming Dakota MRT Station,' he said, adding that the apartments that will be built on it can cater to HDB upgraders as well as investors on a tighter budget.
But Ms Tay Huey Ying, director for research and advisory at property firm Colliers International, said developers may not be overly keen on the site and probably only mid-sized and larger developers would bid for it.
She believes developers will stay cautious and limit their interest to sites that cost less than $150 million and that are located in the suburbs or the city's fringes, where demand is strong now.
No state-owned residential land has been sold since September last year, when a site at the junction of New Upper Changi Road and Tanah Merah Kechil Avenue was awarded for $84 million.
Even that site was on the Government's confirmed list, which means it was put up for sale at a fixed date regardless of whether developers had expressed any interest in it. The last time a developer has proactively put in a bid for a reserve-list site was almost two years ago, in November 2007.
But property consultants say developers could now be looking to replenish their land banks, given that they are now selling more new homes to buyers who are returning to the market in droves.
Developer GuocoLand, for instance, said yesterday that it has sold 117 of the 272 units in one of its projects, Sophia Residence in Mount Sophia.
It had released 38 units initially and sold them all, so another 100 units were made available during the project's official launch last weekend, GuocoLand said in a statement. Selling prices range from $1,450 to $1,850 psf, and all the studio and two-bedroom units - which start from about 600 sq ft - have been sold.
Six in 10 of the buyers so far are Singaporeans. The rest are permanent residents as well as foreigners from Indonesia, Malaysia, South Korea, Taiwan, Myanmar, China, Australia and Europe, the developer said.
Only 20 per cent of buyers took up the interest absorption scheme that allows buyers to defer the bulk of their payments until their units are completed. The rest opted for the normal progressive payment scheme at a 2 per cent discount.
Source: Straits Times, 23 July 2009
Posted by About Singapore Property