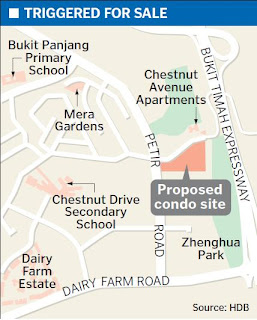 If sold, it will be first state-owned residential site sale in 10 months

EVER since the collapse of Lehman Brothers in the United States and Singapore's slide into recession, the Government has been unable to attract bids for residential development sites.

But yesterday - after 10 straight months without selling a single residential site - the Government said it had finally received an offer for a condominium parcel in Bukit Panjang.

An unnamed property developer has committed to bid at least $62 million for the 244,347 sq ft plot, in what consultants say is a further sign of the property market's rebound.

The 99-year leasehold site located along Chestnut Avenue has been sitting on the Government's reserve list since March last year. Sites on the reserve list are made available for sale, but are not launched for tender until a developer puts in a minimum bid.

Now that the Chestnut Avenue plot has been triggered for sale, it will be put up for tender by the Housing Board by the end of this week, HDB said yesterday.

The bid submitted works out to about $120 per sq ft (psf) of potential gross floor area, as compared with the $220 to $270 psf expected when the site was first made available in March last year.

The Chestnut Avenue site can accommodate a development of about 450 units.

If sold, it will be the first state-owned residential development sale since Sept 10 last year - just before Lehman's demise - when a condo site at the junction of New Upper Changi Road and Tanah Merah Kechil Avenue went for $84 million.

A few days later, on Sept 16, the HDB launched an executive condominium site at Punggol Field, but found no takers.

Now that buyers are returning in large numbers to showflats, developers' confidence appears to be on the rise, according to consultants.

Home buyers have been snapping up more than 1,000 new homes each month since February, culminating in a record 1,825 new homes sold last month - even more than the number sold in August 2007, the peak of the boom two years ago.

Yesterday's offer for Chestnut Avenue shows that there is renewed interest in the market, according to Jones Lang LaSalle's head of Singapore research Chua Yang Liang, who is still only cautiously optimistic.

'The market is stirring and some developers may be excited, but by and large I don't think there's an overall bullishness in the market,' he said.

And he predicts just a handful of bids for the Chestnut Avenue land.

'I'm not sure if the rest of the developers will bite, considering there is still uncertainty in the larger economy.'

The site is located near other property developments such as Maysprings, Cashew Heights Condominium and Hazel Park Condominium. In recent months, units at the 99-year leasehold Maysprings have been sold at just below $500 psf, while those at the other two condos - both freehold - have gone for $560 to $600 psf, said CB Richard Ellis Research's Mr Li.

He expects the developer who buys the Chestnut Avenue site to plan to sell finished units at more than $600 psf. Such entry-level private homes would be targeted at HDB upgraders - a promising segment of buyers unaffected by fears of a possible oversupply of mid-tier and high-end homes.

Analysts are anticipating more developers to resume buying land in the second half of this year, given that the Urban Redevelopment Authority has received inquiries about some of the other sites on its reserve list.

Also, as market sentiment improves, developers have started to pick up land meant for hotel and industrial development.