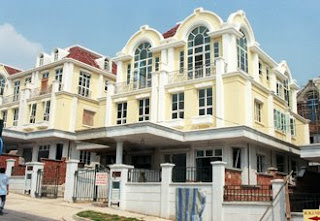 But HDB resale prices rose 1.4%
SINGAPORE private home prices fell 4.7 per cent
in the second quarter, less than the preliminary 5.9 per cent drop estimated earlier, in signs that the recession is easing.
The price index of private residential property declined to 133.3 from 139.9 in the previous three months, the Urban Redevelopment Authority (URA) said in a statement on Wednesday. This is the 4th straight quarter decline but it is less than the 14.1 per cent sharp drop in the first quarter.

Prices of landed properties fell by 4.7 per cent, compared with the 9.2 per cent drop in the previous quarter. Prices of detached, semi-detached and terrace houses fell by 6 per cent, 3.6 per cent and 3.9 per cent respectively.

A total of 3,869 uncompleted private residential units were launched for sale by developers in the second quarter, compared with 2,108 units in the earlier quarter. Of these , 1,134 units were in CCR, 1,426 units were in RCR, and 1,309 units were in OCR.

The total number of sub-sales was 940 in Q2, compared to 412 in the previous quarter. URA said the vacancy rate of completed private residential units remained at 5.9 per cent as at the end the second quarter.

Prices of private office, shop and industrial properties also fell by 3.9 per cent, 1.4 per cent and 4.5 per cent in Q2.

Private home sales in Singapore have soared since the start of February, reaching a record high of 1,825 units in June, while home loans were up 8.8 percent year-on-year in May, the latest month for which data is available.

National Development Minister Mah Bow Tan said on July 9 there was no sign of excessive speculation in Singapore's residential housing market, amid growing concerns in some parts of Asia about a looming bubble in stocks and property.