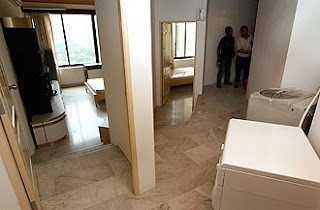 TENANTS who refused to move out of The Grangeford condominium in Orchard Road have stymied the building owner's efforts to tear down illegal partitions.
As a result, Cove Development, the owner, has applied to the Ministry of National Development for an extension of the original deadline, which expired yesterday.
Cove had been given more than a month to tear down the partitions, but said in its application that work had been held up by 'recalcitrant former tenants who had earlier shown resistance in vacating Grangeford'.
The firm did not want to say how long an extension it asked for.
When contacted, the Urban Redevelopment Authority (URA) would not say if the request would be approved.
The saga began after the previous master tenant of the condominium, Ideal Accommodation, was found to have illegally partitioned the units in the building.
On April 29, the URA ordered it to restore the apartments to their original condition by June 3.
Ideal's tenancy agreement was also terminated by Cove.
However, tenants were incensed that they were given only a short period to move out.
Several tenants claimed their leases with Ideal were still in force and refused to go.
Cove managed to get some of them to sign new leases with it, but others dug in and refused to go, despite having their utilities cut off.
Yesterday, however, Cove said that the remaining former tenants have been evicted.
It said in a statement that a court sheriff was at The Grangeford last Friday and Saturday to 'recover possession of locked apartment units and evict the remaining recalcitrant former tenants'.
'With this latest update, Cove Development has successfully recovered all the 171 apartment units previously leased to Ideal,' it added.
Source: Straits Times, 28 July 2009
Posted by About Singapore Property