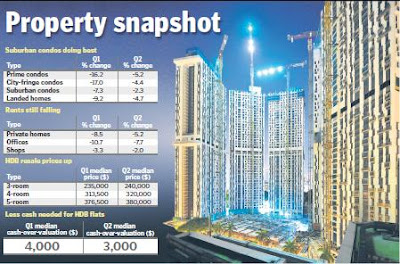 Decline in upfront cash required makes resale flats more affordable
PRICES of Housing Board flats rose 1.4 per cent in the second quarter to a record high, reversing a first-quarter dip of 0.8 per cent.
The number of transactions also soared - up 58 per cent in the three months to June 30 - as confidence grew and buyers rushed back into the market.
One reason for the HDB market's resilience amid testing economic times is the decline in the amount of cash required upfront to buy a resale flat. This amount is called cash-over-valuation (COV) and is falling or at least stable across all flat types.
Fresh figures released by HDB yesterday showed that the median COV for all flat types fell to just $3,000 in the second quarter compared with $4,000 in the first quarter. The median COV is at a relatively low $5,000 for three- and four-roomers and stayed at zero for five-room and executive flats, for both the first and second quarter.
Median COV for two-roomers declined from $7,000 in the first quarter to $6,000 in the second.
This is a marked change from the 2007 property boom, when median COV hit $22,000 in the fourth quarter, pricing many first-time buyers out of the resale market.
COV has come down due to valuations of resale flats catching up, said ERA Asia Pacific associate director Eugene Lim.
So even though values of HDB resale flats are high, they have become more affordable as buyers can get bank loans for the purchase and do not have to fork out high amounts of cash.
Sales activity was robust in the quarter with transactions up to 10,184 compared with 6,446 in the first quarter. They were also up 31 per cent from the 7,763 units sold in the same period last year.
Sales of five-roomers rose 80 per cent - 2,713 were moved - over the first quarter while executive flat transactions surged 100 per cent to 753. Four-room flat sales climbed from 2,488 to 3,787.
PropNex chief executive Mohamed Ismail noted that sales of the bigger flat types had suffered in the three quarters up to the end of March amid growing concerns about Singapore's worst recession.
'These numbers are a clear sign that people's market confidence is growing,' he said, adding that feedback on the ground indicated that demand in mature estates far exceeds supply.
The sales of larger flat types also explain the strong demand from HDB upgraders who sold their flats to buy private homes, said property veteran Nicholas Mak.
Private home sales, especially in mass-market suburban condos, have enjoyed brisk sales since February.
Meanwhile, HDB rents were stable. Median rents for two-room and five-room flats for the second quarter were unchanged but fell by $100 for three-room, four-room and executive flats.
HDB plans to launch a further 6,000 units under its build-to-order scheme over the next six months. About 2,400 will be three-room and smaller flats. The bulk of new flat supply will be in Punggol. So far, HDB has launched about 2,000 new flats in Punggol, Sengkang and Woodlands this year.
Analysts predict that HDB flat prices will enjoy modest increases as confidence continues to grow.
But the falling COV for large flats could indicate limited upside for prices of these flat types, said Mr Mak. 'This could also limit the HDB upgraders' demand for private property in the short term,' he said.
Source: Straits Times, 25 July 2009
Posted by About Singapore Property